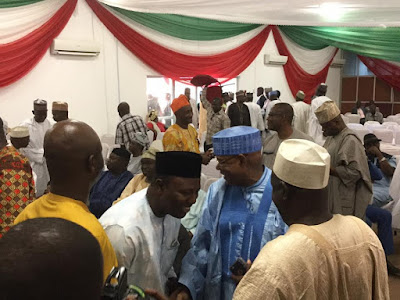 The Minority Leader of the Peoples Democratic Party (PDP) in the Senate and former Akwa Ibom State Governor, Godswill Akpabio, has said that about 20 senators from the All Progressives Congress (APC) are planning to defect to the PDP once peace returns to the party.

Akpabio, who stated this on Thursday, at the opening of the National Executive Committee (NEC) and expanded caucus of the PDP, held at the International Conference Centre, Abuja, said that despite some defections that hit the party recently, PDP senators in the National Assembly are still intact and very supportive of the party.

He said just as the party has lost senators through defections, there are also some others who have joined the PDP through elections and the court pronouncements.

Akpabio told the gathering that the chances of the party bouncing back to power is very bright today than ever, adding that “no election that will be conducted in the former PDP 28 states that the party will not win.
"As I speak, so many senators from the opposing party are eager to join PDP. All they want is a return of peace to the party, once that is done, I can assure that 20 senators are on their way to joining the PDP. My message to those who are thinking of defection is to retrace their steps because PDP is bouncing back to victory in 2019."
The Minority Leader, however, warned that if the party fails to put its house in order, it may lose in Ekiti State, adding that there is an urgent need to tackle the crisis in the party so as to avoid further loses.
The meeting was well attended and has the National Chairman, Ahmed Makarfi, CON, Chairman, Governors Forum, Chief Ayo Fayose, Chairman, BOT, Sen. Walid Jubril, Governors of PDP, members of the National Caretaker Committee, House Minority Leader, Hon. Leo Ogor and other Party stalwarts.
Tweet