6 shot during vigil for gun violence victim in Chicago 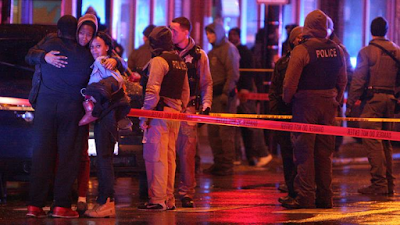 No fewer than 6 people were shot when gunmen stormed a vigil being held for gun violence victim,  Jamayah Fields, 20, in Chicago's South Side. The attack was reportedly carried out by a rival gang targeting one of the attendants at the funeral. The gang found out about the vigil on Facebook and stormed the restaurant where the memorial was holding, shooting sporadically. The person targeted by the rival gang was one of those shot.
A 12-year old girl was also grazed in the head by a bullet, a 20-year-old woman was shot in the right leg and a 43-year-old woman was shot in the hand.


A 16-year-old boy received a bullet to the neck, a 20-year-old woman was shot in the left leg and buttock and the last of the victims was a 17-year-old boy. Thankfully all the victims have been stabilised.
Tweet