Bayelsa opts for No work, No pay pay theory 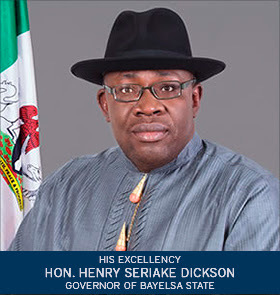 The Bayelsa State Government has announced a number of stern measures, including outright dismissal of any of its workers who would be found culpable of absenteeism, truancy, payroll fraud and other sharp practices that are inimical to the public service rules.
Also, as part of efforts to enhance the productivity and welfare of the workers, the government says, it has approved the reinstatement of monthly imprest, otherwise known as overhead cost to enable all MDAs and parastatals cater for some of their basic needs.
Spelling out the various sanctions while briefing Government House Correspondents on Friday shortly after an interactive meeting between Governor Seriake Dickson and members of the state executive council, heads of ministries, departments and agencies (MDAs) in Yenagoa, the Secretary to State Government, Chief Serena Dokubo-Spiff, reiterated the present admnistration's commitment towards bequeathing a robust and result-oriented civil service.

Chief Dokubo-Spiff, who briefed the press alongside the state Information Commissioner, Hon Jonathan Obuebite and Chief of Staff, Government House, Rt Hon Talford Ongolo, said a full-proof system has already been put in place to identify and weed out unrepentant absentee workers, stressing that, the days where public servants stay at home to receive salaries were over.

He pointed out that, though, the move was not aimed at witch-hunting any worker, the new monitoring system requires every worker to report for duty on a daily basis and sign the attendance register already provided by the government, as failure to do so would attract severe penalties, including summary dismissal.

According to the chief scribe, Governor Dickson lamented that the lean resources accruing to the state government were being negatively impacted by its overbloated wage bill, and therefore, expressed determination to continue the ongoing fight against those he described as unpatriotic elements in the service, who are hell-bent on fleecing the state dry through the use of ghost workers and other fraudulent activities.

On his part, the Commissioner for Information and Orientation, Hon Jonathan Obuebite said the meeting also mandated government to commence implementation of full payment of all relevant taxes and levies including education levy by workers and other taxable adults as well as corporate entities to boost the revenue base of the state.

Throwing more light on the education levy, Hon Obuebite stressed that its introduction did not mean a reversal of the present admnistration's free education policy at the basic and post primary school levels, but rather, it is targeted at promoting efficient delivery of quality education in the state.

Also speaking, the Chief of Staff, Government House, Rt Hon Talford Ongolo, expressed confidence in the efficacy of the current monitoring system, which he noted, would be a continuous process as against the one-off-verification exercises of the past.

While calling for cooperation, Rt Hon Ongolo urged all public servants to take the state government's warning seriously by putting up physical appearance at their various duty posts to avoid any unpleasant consequences, adding that arrangements have been concluded for the administration to launch its new policy of "No Work, No Pay" next week.
Tweet