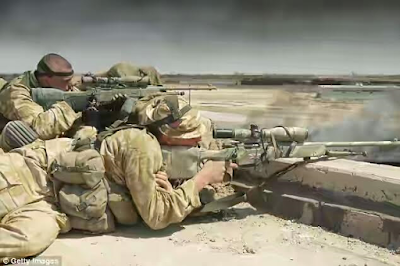 In what has been described as a shot in a million, a British marksman in Iraq killed three senior ISIS terrorists with one shot from a range of 1800m as they were preparing to fire shots into a crowd of women and children. According to a source who spoke with The Daily Star Online, a SAS squad was tracking the IS members when dozens of women and children tried to flee from the extremists.
When the terrorists ordered the civilians to stop and pointed a machine gun at the crowd from a second-storey window, the SAS team decided they had no choice but to open fire and save the fleeing group.
The marksman saved the day with his wonder shot taken from a rifle fitted with a suppressor to reduce noise.

The bullet first struck the man holding the machine gun in the head then hit a second terrorist in the chest. It passed through his body, ricocheted off a wall and hit a third man - who was in the same room - in the neck. The source said the 'shot was one in a million' and added that he didn't believe it was planned. 'Alongside the sniper was an SAS spotter, who was watching the target through binoculars,' he said. 'The whole incident was over in a flash.' The third man lasted for about 30 seconds before dying, while the others were killed instantly.
'No one could quite believe what had happened,' the source added. The SAS team entered the house following the shooting and confirmed that the three men were dead. They took fingerprints and photos of the scene and left by helicopter. The incident took place in November last year but has only just come to light.
Tweet