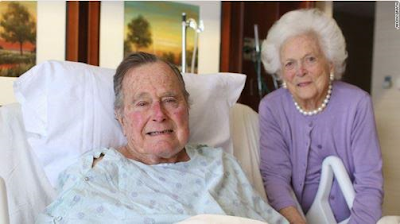 Ailing former US president George H.W. Bush will be moved out of the Houston Methodist Hospital Intensive Care Unit soon but he will remain in the hospital for now, his doctor said in a news conference.

"A Friday discharge might be a little bit optimistic, It's a bit of a moving target" Dr. Clint Doerr told reporters.

However, former First Lady Barbara Bush who was hospitalized with her hubby has been discharged from the hospital.
The former president's doctors said he is in good spirits, as well as sitting up and watching television.
The 92-year-old was admitted to the hospital January 14 to address a respiratory issue stemming from pneumonia.
Former President, George H. W. Bush and his wife, Barbara Bush have been married for 72 years.
Tweet