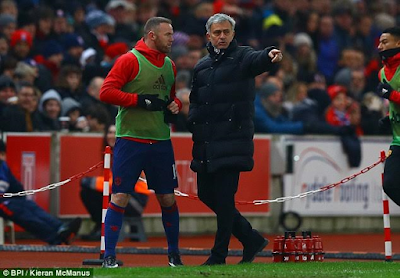 Man Utd coach Jose Mourinho has revealed that he is ready to let Man U legend Wayne Rooney - who is now the club's highest goalscorer with 250 goals, join China in a mouth watering deal if the England/Man U captain decides to leave. According to Mourinho, Rooney's service to an U has distinguished him and affords him the opportunity to end his glorious career the best way he deems fit.
The United captain's contract expires in 2019 and clubs in China are circling, willing to make him the highest paid player in world football, with Mourinho saying he won't begrudge Rooney a  last minute Chinese pay day

'He has more to give us,' Mourinho said to reporters on Sunday. 'You reach a certain level in his career when it is up to him. Could anyone have been critical of Zlatan (Ibrahimovic) if, last summer, he decided to go to China or USA? 'One guy who has had an amazing career, and it is the same with Wayne. The way he wants to end his career, the way he wants to enjoy the last part of his, that belongs to him.' 'I know some of my colleagues think they are more important than they are  (shade at Liverpool coach Jurgen Klopp who criticized Oscar's £400,000 p/wk move to Shanghai) and think they can interfere in the lives of other people, but I'm not that sort of guy,'

'Everybody is responsible for their own life, I'm not critical with anyone. To be honest, in Wayne's case, I have no idea, because he has never mentioned it to me. 'It's up to him. I don't like to be critical of players who decide to go to China. It's their life, it's their organisation of their life, their organisation of their career. The money is huge, the experience can also be interesting.'