Mariah Carey surprises her boyfriend with a lap dance on stage 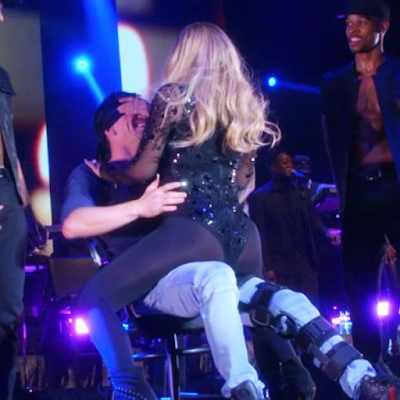 On a new episode of Mariah Carey's reality show, Mariah's World, the sexy diva surprised her boyfriend, Bryan Tanaka, with a lap dance while performing on stage. Bryan, who is one of Mariah's dancers was not on stage with her due to an injury he sustained during the tour, then as Bryan watched Mariah perform, unsuspecting, he was suddenly carried on stage and blindfolded and Mariah proceeded to give him the moment of his life as she ground against his lap.

Mariah sang one of her hit songs 'Touch my Body' while dancing on Bryan and afterwards said to the crowd, "That was his moment, he wounded his leg during the tour!"

Prior to this dance, Bryan had previously surprised Mariah with a lap dance too and he gushed at this obviously pleasant surprise from his lover.

"I'm freakin' out!" Tanaka says. "I feel pretty nervous, pretty shocked...I got a lot of energy going on, fluttering through my body."