Photo: "It is God's gift to us" says woman who gave birth to baby with four legs, two male sex organs 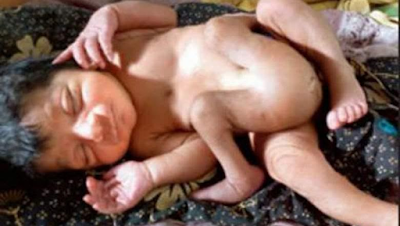 A 23-year-old Indian woman has delivered a baby with four legs and two male sex organs, reports Times of India. The baby was born at Dhadeasugure Primary Health Centre (PHC) in Raichur on Saturday, January 21. The new born has been taken to Vijayanagara Institute of Medical Sciences (VIMS), Ballari and placed under neonatal care.
Initially, the mother of the baby, Lalitamma, was reluctant to take the infant to VIMS for higher treatment.

"It is God's gift to us," she told the doctors. "My first son, born three years ago, is healthy. We are poor and cannot afford expensive treatment," said Lalitamma, adding that she was willing to raise her newborn child just the way he was.


"I referred the family to VIMS. I spoke to the surgeons there on Sunday, and they told me that the baby was being kept under observation. I hope the infant becomes normal."

Dr Divakar Gaddi, who is handling the baby's case at VIMS, said a team of surgeons ae looking into the baby's condition.


"It is a very challenging case for us." he added.