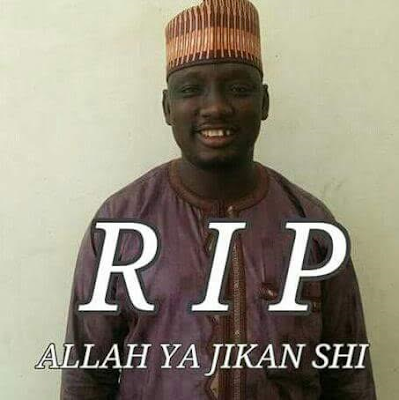 35 year old Mahupa Bello, pictured above, was shot dead on Thursday January 18th, after his family failed to pay a ransom of N3 million his kidnappers demanded for his release.

Narrating what happened, Musa Zamzam who is a friend of the deceased, told LIB that Bello who is married with two children, was an apprentice with a Bureau de change company in Abuja.


He resides in Kaduna but comes to Abuja everyday to learn the trade. On the day he was kidnapped, Bello had accompanied two of his friends in their Mercedes Benz E class as they embarked on a journey to Kaduna state. On getting to Jere at about 8pm, they were ambushed by a group of men who thought he was the owner of the Mercedes Benz since he was sitting at the "owners corner". They ordered him to come down and told the other two occupants to continue driving so they can go home and inform his family members that he had been kidnapped.

The kidnappers reached out to his family members with a telephone number that was not hidden. Upon investigation, it was discovered that the phone is owned by one of their victim and this was their practice. The kidnappers asked for a N3 million ransom.

Two of the abductees who are said to be the sons of a Senator, were released by the kidnappers yesterday after allegedly paying a N10 million ransom. They called Bello's brother whose number they had on their phone as the kidnappers had used it to call before. They informed the brother of the deceased that he was shot dead in their presence on Wednesday because they had failed to pay the N3 million ransom. The senator's sons said the kidnappers told them that they shot Bello dead to make the others know that they were in for serious business.

Meanwhile the family of the deceased are waiting for information on where their brother's remains will be dropped by so that he can be given a proper burial.