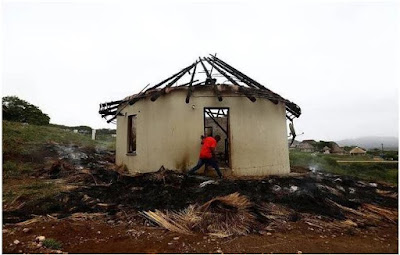 Mabuyi Zuma, the niece of South African President, Jacob Zuma, survived lightning strikes during a severe thunderstorm that burnt down her home in KwaNxamalala village. According to Tuko News, the fire began after a severe thunderstorm on Tuesday afternoon, burning down Mabuyi's thatched rondavel with four other houses destroyed during the storm.
The 43-year-old who luckily escaped the scene is said to have lost everything‚ including identity documents‚ birth certificates‚ bank cards and furniture during the fierce storm.
Recounting the shocking experience, she said:

'The storm gathered quickly and there was a lot of lightning. I went inside to unplug the TV and other appliances. But a minute later there were red and yellow flames all around. I took out the child and cellphones and ran out.'