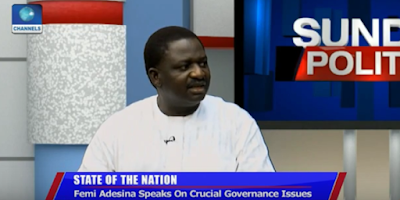 Special Assistant to President Buhari on Media and Publicity, Femi Adesina, was a guest on Channels TV last night where he gave a true picture of President Buhari's health.

Asked Why President Buhari has always sought medical attention oversees instead of in Nigeria, Adesina said "You have what is called medical history where you consult people who are used to you and your constitution and your health, they have your medical history. Before he became President, he has been using these people. It serves to reason that the same people should continue to attend to him".
On whether President Buhari ever uses the medical facility in Aso Rock, Adesina said "I can't say.  because when the President is at home, I have never seen him fall sick but he has a personal physician who attends to him. I will not be able to say categorically whether he uses the Aso Rock facility or not".
Adesina said President Buhari knows that Nigerians are going through tough times.
Tweet