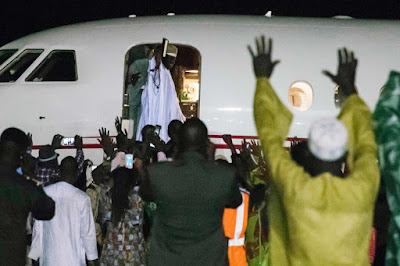 After weeks of political crisis and on the verge of military action to forcefully oust him, Gambia's ex-president, Yahya Jammeh accepted to step down for his successor, President Adama Barrow on Friday. Along with a mediator, Guinean President Alpha Conde, he was flown to Equatorial Guinea on political exile.

The Nation newspaper reports that the Private jet of the National leader of All Progressives Congress (APC), Asiwaju Bola Tinubu, was used to take Jammeh out of Gambia.

The leaders reached out to All Progressives Congress (APC) stalwart Asiwaju Bola Tinubu who authorised his private aircraft to be used to fly Jammeh out of Banjul.

Tinubu’s VP-CBT Falcon Jet had been with President Conde, who is a close friend of the leading politician. It was not until late on Saturday night that Jammeh agreed to go.

Sources said Tinubu was contacted to allow the use of his jet to fly Jammeh out of Banjul. He reportedly gave a condition: it should only be used “if it will facilitate the quick exit of Jammeh and lead to the restoration of peace and democracy in The Gambia”.

The plane eventually flew out with Jammeh, his wife, mother and President Conde on board.
Tweet