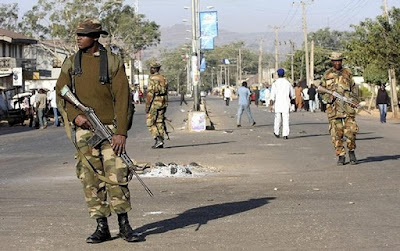 Troops in Kamuya, Yobe state last night foiled an attempted by a large number of Boko Haram members to dislodge them and capture their military base. According to reports, the sect members who were over a hundred and armed with all manner of sophisticated weapons, stormed the military base at night. They engaged the Army in a fierce gun battle that lasted over an hour.

The troops killed many of the sect members while others fled the scene with gun shot injuries. Three soldiers were reportedly killed while some others are said to be missing. The Nigerian Army is yet to release a statement regarding this new attack.
Tweet