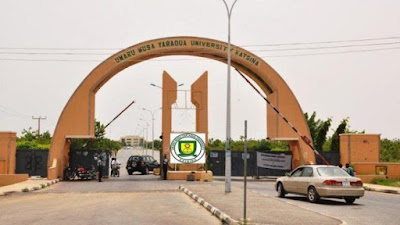 There was a public outcry over the weekend after a memo from the authorities of the Umaru Yaradua University in Katsina state surfaced online, announcing that the school only recognizes the Muslim Students Society of Nigeria MSSN, as the only religious association allowed to operate in the University, a copy of the memo above.

Some Nigerians felt the memo was targeted at stopping Christians in the school from associating. 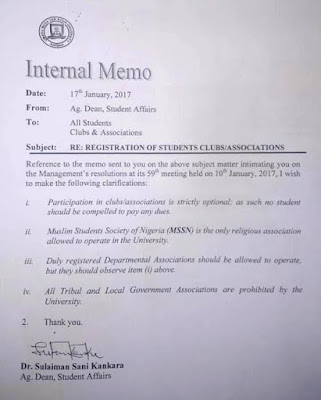 Reacting to the controversies surrounding the memo, the Dean of Student Affairs in the school, Dr Sulaiman Kankara, told Premium Times that the memo had nothing to do with Christians.


“Actually there is one misconception in the memo. But the fact of the matter is that in Umaru Yar’Ádua University, there is no association known as Christian Students Association. There is one religious association and subsidiary Islamic students associations like the Tijjanniya Students Movement in Nigeria, Academic Forum of Islamic Movement in Nigeria and many associations like that. They are Islamic students association. So what we want is to have a single union which will be the mouthpiece of muslim students and that is the Muslim Students Society of Nigeria. It has nothing to do with any Christian group because up till now, I have not received any application requesting registration of Christian Students Society. And once they do that, we are ready to register them. Even as at last week, we said the two religious group to be recognised by the university will be the Muslim one and one from Christian side. Up till now we are to receive any application for the registration of any Christian association in the university from any group.”he said