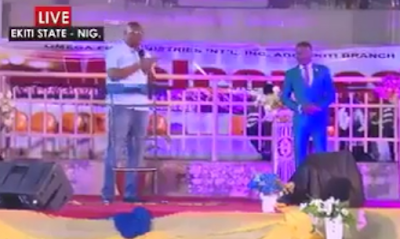 Ekiti state governor, Ayo Fayose was at the crusade organized by controversial Edo-based pastor, Apostle Johnson Suleman, in Ekiti state on Wednesday. Fayose commending him for been a very vocal pastor that has not allowed himself to be taken over by fear like some other pastor that have kept quiet in the face of the religious crisis in the North.


"You are a very vocal pastor. You are a very vocal apostle. You say it as it is. You are You allow God not to allow you to be captured by fear that has captured pastors today. The voice of a lot of people is gone. They are now vegetables. They cannot say the truth. When they invite them to the villa, their voice will change. Killing Christians no more matters to them. Taking away the right of humanity no longer matters to them"he said.