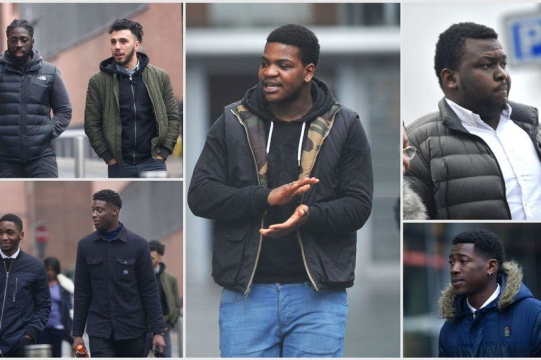 7 Manchester United Kiosk workers are facing jail time after they were captured on camera stuffing money down their trousers.

The management installed the peephole cameras at an Old Trafford burger stand after they noticed that the tills were repeatedly down and this helped them catch the employees stealing some of the money.
The employees caught are Anthony Agabaje, Mustafe Belkhair, Fliavio Andrade, Lugman Arogundada, Justino Edmilson, Mwila Bwanga and Olamide Oyawoye. The seven of them, all between 20 - 22 years, were linked to around £600 taken when Old Trafford hosted a rugby league match. In total around £4500 has disappeared.and the young workers have been convicted of theft by their employer.

During the hearing at the Manchester Magistrates Court, Anthony Agabaje, 21, of Folkestone Road West, Clayton, and Mustafa Belkhair, 20, of Beamish Close, Ardwick, denied the allegations brought against them but were found guilty at a trial yesterday.

It was heard in court that Fliavio Andrade, who was team leader at the kiosk, was at the centre of the scam. After a game between Warrington Wolves and Wigan Warriors at United’s ground on October 8 last year, it was discovered that the tills at the kiosk were £382 short. A full stock check revealed more than £200 of food and drink was missing as well so they analysed the CCTV and discovered what the employers had been up to and got them arrested.

The Prosecutor, Heather Alsop, speaking to the court, said: “There is evidence the defendants took money from the till and put it down their trousers as well as inside blue gloves meant for hygiene. The money was passed around and shared out. It is said Mr Andrade took a cut of that money before the other team members pocketed the remainder.”

Agabaje said he had not stolen any money that what he had been putting down his boxer shorts were a bag of cannabis and two joints and that he was high on the drugs so had no idea what he was doing.  On his part, Belkhair, claimed he had been given a lot of tips and hid them in his trousers because he was afraid of having them confiscated.

All seven will be sentenced at Manchester Crown Court next month.
Tweet