One young Chinese mistress got a full measure of the popular saying, 'hell hath no fury like a woman scorned'. She was engaged in the adulterous act of pleasuring her married lover when his wife caught them in the act, dragged her by her hair and paraded her naked in the streets. The wife is said to have suspected the affair after her husband kept disappearing once a week for hours without contacting her so she enlisted the help of her mother and aunt to spy on him.

They tracked to him to his love nest and unleashed the full measure of their wrath on his mistress. 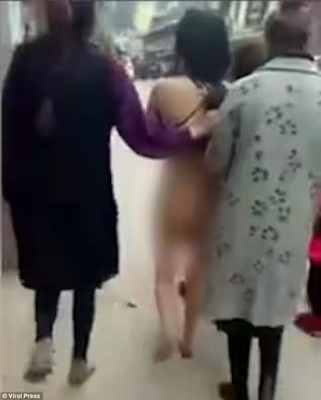 Video circulating online shows the scorned wife parading the mistress through the streets naked, flanked by her relatives and shouting to attract attention. They were eventually stopped by bystanders who stepped in to help. 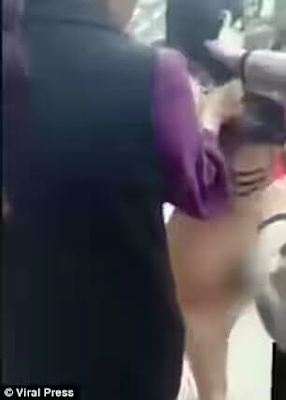 The video maker, named Chichi Chan, claimed that the younger woman 'accepted' her treatment as she knew she was in the wrong.


'Nobody has sympathy for the woman that gets caught doing this with another woman's husband,' she wrote. 'She was accepting of her punishment because she knows that she did the wrong thing. 'It is a good warning for other people not to do this. People should be afraid of what the consequences are.'