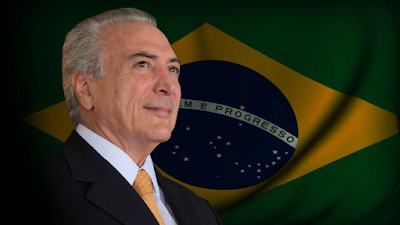 Brazilian president Michel Temer has abandoned his beautiful official residence in the capital Brazilia. He claims bad vibes and ghosts did not let him and his family sleep well at night.

He moved alongside his former beauty queen wife,  Marcela Teme and their seven-year-old son, Michelzinho and relocated down the road to the residence of the vice-president, a Brazilian news weekly reported on Saturday.
Temer was quoted by the newspaper as saying,

'I felt something strange there. I wasn’t able to sleep right from the first night.The energy wasn’t good,' he said.

According to the newspaper, his wife, Marcela felt the same thing, but only Michelzinho (their son), who went running from one end to the other, liked it.
Marcela had reportedly brought in a priest to pray and drive out any evil spirits, but to no avail.
The family has now moved to a smaller luxurious apartment around Jaburu Palace.
Tweet