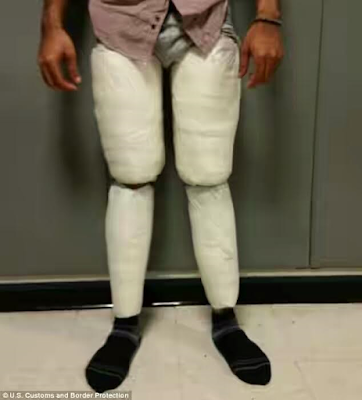 US Citizen Juan Carlos Galan Luperon must have thought he had discovered the ultimate smuggler's trick when he decided to sneak ten pounds of cocaine into the country disguised as part of his clothing. Luperon who was returning to the US from the Dominican Republic via John F. Kennedy International Airport in New York wrapped the drugs worth $164,000 around his legs and wore his trousers over them.
US Customs and Border Protection said Luperon was nervous and 'bursting out of his pants,' which 'appeared to be rather snug.'
He was taken to a private search room where the packages taped to his body almost looked like leg casts.
Luperon could be charged on the federal level with smuggling charges and will be prosecuted by New York's US Attorney office.
Tweet