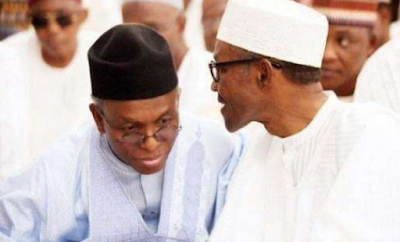 In the Memo which was recently leaked to Sahara Reporters and shared online, El-Rufai bluntly told President Buhari that his government has failed in delivering the mundane things any government is expected to deliver to its electorates. He said aside winning the battle against Boko Haram and corruption, this administration has not delivered on any other electoral promise.

"In very blunt terms, Mr. President, our APC administration has not only failed to manage expectations of a populace that expected overnight ‘change’ but has failed to deliver even mundane matters of governance outside of our successes in fighting BH insurgency and corruption. Overall, the feeling even among our supporters today is that the APC government is not doing well”El Rufai stated.

According to the 56 year old governor, some aides of President Buhari, have refused to work with others for the progress of this administration. He noted that the Secretary to the state government, Babachir Lawal is inexperienced in public service and sometimes rude to those who want to work closely with President Buhari. El-Rufai went on to state that the Chief of Staff to President Buhari, Abah Kyaru, is totally clueless of his position.


"The two officials whose titles may enable them function as such, generally alienate those that contributed to our success.  The Chief of Staff is totally clueless about the APC and its internal politics at best as he was neither part of its formation nor a participant in the primaries, campaign, and elections. In summary, neither of them has the personality, experience, and the reach to manage your politics nationally or even regionally".

He advised President Buhari to communicate more often to Nigerians about his intent and purpose for the Nation.


“The President should speak to the nation, something akin to a State of the Union address on December 1 or January 1st, preferably in a joint session of the National Assembly during which he will explain away some of the perceptions and lay out the national plans, strategies, and roadmap".

He stressed that his memo might be taken as an act of arrogance and ambition but he is ready to take the consequences just to see that this administration works effectively.


“I ran for state Governor because you directed me to do so. From 2010 when we joined your team, I have no other interest other than your place in history as our President. I believe in your integrity, commitment and sense of duty to make our nation better. I am distressed that our government is seen not to be succeeding mostly due to the failures, lack of focus and selfishness of some you have entrusted to carry on and implement your vision. I am troubled that our own missteps have made the PDP and its apparatchiks so audacious and confident.”

The governor stated that no northerner can ever become relevant on National level so long as President Buhari is there. He urged him to continue his tenure in 2019.


"Mr. President, it is also clear to many of us that have studied your political career, that so long as you remain in the political landscape, no Northerner will emerge successfully on the national scene. All those wasting time, money and other resources to run in 2019 either do not realize this divinely-ordained situation or are merely destined to keep others employed and rich from electoral project doomed to certain failure.”he said in his memo