Home » Local » 45-year-old man who impregnated primary school pupils insists he did nothing wrong, that they were in a relationship

45-year-old man who impregnated primary school pupils insists he did nothing wrong, that they were in a relationship 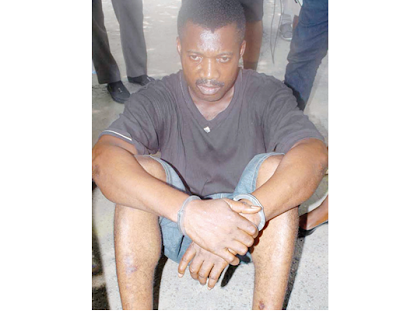 A 45-year-old man who was arrested for raping a 13-year-old primary school pupil is insisting that he did nothing wrong. He claims he had a relationship with the minor and that she was his fiancée.

Victor Emmanuel, 45, was arrested by detectives attached to the Ajangbadi Police Station after they were informed of a pregnant student who was raped by a man.
The 13-year-old girl, whose name is being withheld, sells plantain after school and will sometimes stop by Victor's shop, where he sews clothes, to sell plantain to him. It was reportedly on one of such days that he took her into his shop and raped her.

Now, he is insisting what he did was not rape and was acceptable as he was in the process of getting married to the girl and has even paid her bride price. The Imo state indigene said he has given the girl's parents N20,000 for her bride price and to get drinks. He also claims to have paid an additional N64,000 as part payment for the marriage rites. He claims that he's been following the girl to the hospital for antenatal care and settles every bill at the hospital. He went on to encourage the police officers to go to the girl's compound and ask her neighbours about him, that they will all testify he's telling the truth. Meanwhile, when he was asked for the name of the pregnant girl's school, her home address and her parent's name, he could not answer.

New Telegraph reports that Emmanuel claims his supposed parents-in-law consented to the relationship and are denying it now only because their daughter's school authorities said she's too young to get married. He said his supposed father-in-law called and told him that the girl’s school authority said the victim was too young for sexual activities and he was arrested soon after.


"I didn’t rape her! We are in a relationship, " he said. "We’re even planning to get married. We have been dating for eight months now. The girl’s parents know me. Yes, I know she’s pregnant for me. I have accepted the pregnancy and I’m already taking care of her.

"I have started the marriage rites. In fact, the girl’s parents had been collecting money from me. I have paid N20,000 to them for introduction and to buy drinks. They have also asked me to bring N100,000, out of which I have paid N64,000."


“They are already addressing me as husband. I take good care of her, including paying for her hospital bills. I go to her house at Ajangbadi every time. In fact, the mother called me last week and brought some clothes to my shop to sew for her.

"The woman told me that she would be travelling this week. She used to bring food for me and sometimes drops the girl with me at my shop. If police go to their compound to make their investigations, neighbours would tell them that I am her husband. I have also been paying for her ante-natal. Yes, I once went with her to hospital for ante-natal. On most ante-natal days, her mother would come over to collect money from me."

The Investigating Police Officer (IPO), Sergeant Mary Ikumo, said that the victim’s parents claimed not to know or had ever set eyes on Emmanuel and that their daughter, a primary six pupil, was raped by Emmanuel.


"The mother of the victim was with us yesterday. She said she didn’t know the suspect from Adam. The mother said that the girl used to hawk plantain and the suspect was one of her customers. He used to tip the girl N500 every time he buys plantain from her. One day, he pulled her into his shop and raped her."