Don't single out the presidency, there is corruption everywhere- Femi Adesina 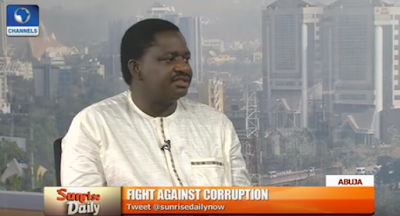 Senior Special Assistant to President Buhari on Media and Publicity, Femi Adesina was a guest on Channels TV this morning to speak on the suspension and investigation of suspended Secretary to the Government of the Federation SGF, Babachir Lawal and former Director General of the National Intelligence Agency, Ayo Oke.

During the interview session, Adesina was asked how deep corruption in the presidency is. In his reply, he said

Asked to react to the question asked by suspended Secretary to the Government of the Federation SGF "Who is the Presidency", Adesina said  Babachir's question was a rhetorical one only him can answer.

Recall that Babachir asked state house correspondents who the presidency was when he was accosted to react to his suspension two days ago.

On why the Federal government is constituting a 3-man panel to investigate the allegations against Babachir rather than have the EFCC or ICPC ivestigate the matter, Adesina said