Family of three killed in Ikorodu is laid to rest 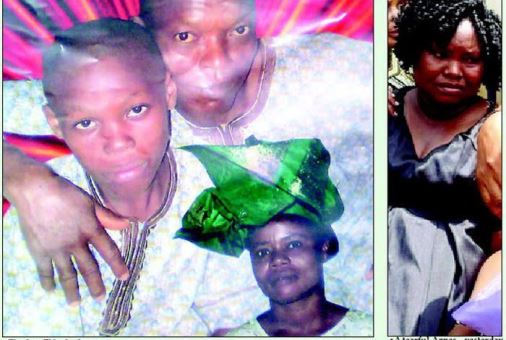 The members of a family of three killed last week Tuesday in Ikorodu, Lagos, were laid to rest yesterday in a very gloomy ceremony.

Tragedy befell the Ebhodaghe family when suspected members of a notorious gang known as Badoo barged into their home at 20, Oyekanmi Street, Ibeshe Tuntun, Ikorodu, Lagos, on the 11th of April, killing a man, Lucky Ebhodaghe, his wife, Margaret Ebhodaghe, and their only son, Jonathan Ebhodaghe.
The remains of the deceased were buried at their Home in Ikorodu yesterday in the presence of family and friends.

According to reports by The Nation, the late Ebhodaghe was lowered into the grave around 10:37 a.m.; the late Mrs Ebhodaghe, at 10:44 a.m. and the late Jonathan, 10:59 a.m. The gang members had raped the woman, tied a white cloth around her waist, and smashed the heads of all three victims before taking their blood.

The late Mrs Ebhodaghe’s sister, Agnes Michael, who spoke to the Nation, said:


"I feel bad and terrible, it is a deep cut; she is the pillar in my family, she led all seven of us to the Lord. Now, they came and wiped off my sister, son and husband for no reason. Justice must prevail."

The Chairman of the Ibeshe Tuntun Community Development Association (CDA), Mr Funshon Akintimehin, mourned the deceased and referred to them as "God-fearing". He said their demise was a loss to the community.


"I have never met him quarrelling, our letters are going to the government and we need them to find a lasting solution," he said.

Akintimehin said there had been several attacks on residents of the community by the faceless gang members and revealed that strategies are being put in place to bring an end to their reign of terror and ensure the culprits are caught.
Tweet