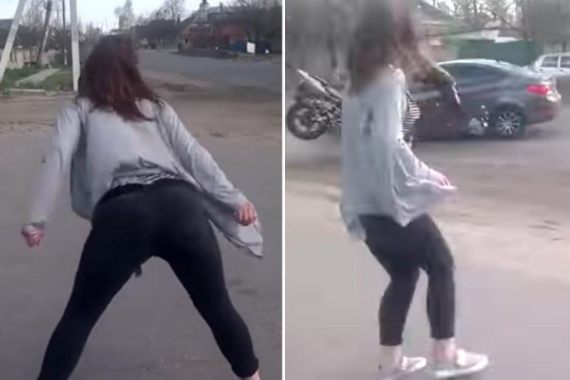 A woman's public dance display resulted in an accident when a biker lost concentration while watching her dance moves and drove into an oncoming car. The video starts with a caucasian woman getting in position to begin dancing while her friend filmed her. She did a bit of warm up first before she started twerking.

Soon after, the sound of a power bike can be heard in the background at about the same time the woman squatted, thrust her buttocks out and began shaking it. As the biker appears in view, the dancer started cheering to get his attention and that made him take his eyes off the road for just a few seconds. He turned his head to look at the woman and failed to notice the oncoming BMW. The bike smashed into the car almost immediately and was flung into the air.

Thankfully, the biker survived the accident. In the clip shot in Ukraine, the wounded biker was seen lying limp in the road.  He sustained a broken pelvis and leg, but nothing life threatening.