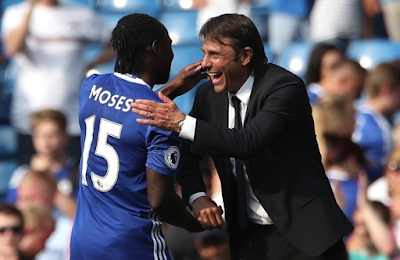 The fan, Mathew Irondu, a Construction Engineer this morning said that he named the boy, born last Thursday after the club’s Coach Antonio Conte and Nigerian star, Victor Moses as his own way of celebrating the win.

According to him, the duo among other Chelsea players, were instrumental to the club’s stunning league success,

'this win is most significant for me because it is the first by Chelsea since I switched my supporter ship to the club from Arsenal FC. I had endured years of EPL drought from Arsenal which made me switch to Chelsea and I celebrated it this way because I don’t have money to make merriment'.

He continued too say,

'this is my first child and I fervently pray that his birth, a day before Chelsea’s league win, will bring good tidings to my family, the club and their fans across the globe'.