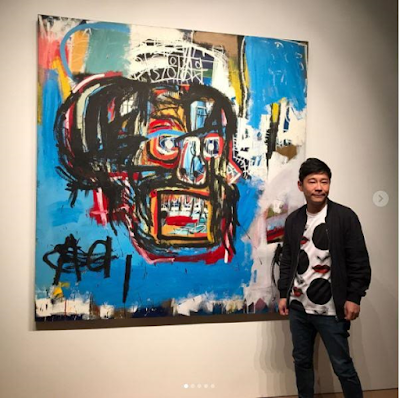 A painting by late American artist, Jean-Michel Basquiat sold for a record-breaking of $110.5 million on Friday at an auction in New York.
The untitled paint which was done in oil stick, acrylic and spray paint, and depicts a face in the shape of a skull has now broken several other records including becoming the most expensive work by any US artist.

It was sold to Yusaku Maezawa, a  fashion entrepreneur who is one of Japan’s richest people, with an estimated fortune of $3.6 billion.
He plans to set up a museum in his hometown of Chiba, Japan.
Taking to his Instagram to post a picture of the art, Maezawa expressed his excitement saying: 'I am happy to announce that I just won this masterpiece. When I first encountered this painting, I was struck with so much excitement and gratitude for my love of art. I want to share that experience with as many people as possible.'
The late Jean-Michel Basquiat who was an artist for 7 years first achieved fame as part of SAMO©, an informal graffiti duo who wrote enigmatic epigrams in the cultural hotbed of the Lower East Side of Manhattan during the late 1970s where the hip hop, post-punk, and street art movements had coalesced. He died of a heroin overdose, in his Manhattan art studio in 1988.
Tweet