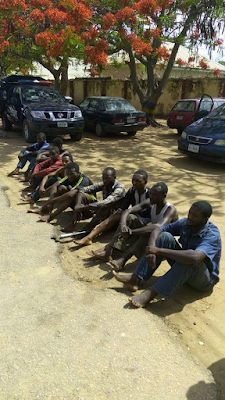 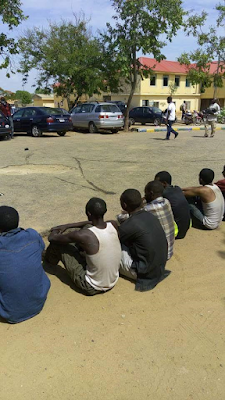 
The suspects had on Monday, May 8th, invaded the house of one Abubakar Mohammed of Madina quarters Bauchi, beat and robbed him of his Samsung Galaxy handset and cash sum of eighteen thousand Naira at gun point and fled.
Exhibits recovered from the suspects include:
One Fabricated Gun
Four live 62mm Ammunition
One Sharp knife
Eleven sticks of cigaratte and other incriminating items.
Meanwhile, preliminary investigation further revealed that the principal suspect Abdulmumini Garba bought the rifle from one Barnabas Ayuba male, aged 26, of Yelwa at the cost of twenty one thousand Naira only (N21,000.00). He was subsequently arrested and voluntarily confessed.

"It will be recalled that on 27/4/2017 at about 2030hrs, between Rimin Zayan and POlchi Road in Toro LGA, J5 Boxer vehicle with Reg No TRR 244XA was attacked by armed robbers in the process, the bus conductor one Kamalu Dan-Azumi male was shot dead and the driver, one Muktari Haladu, male of Polchi village was shot on his right arm." 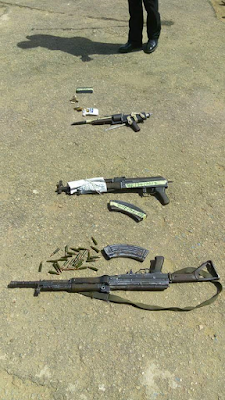 Discreet investigation by the Police in collaboration with Danga Vigilante Group led to the arrest of the following suspects:
Muktari Aliyu male, 22 of Barikin Ladi Jos East LGA Plateau
Adamu Umaru, AKA Bayero male, 24 of Bukuru Jos North
Sabiu Musa, male, 27 of Magama Gumau, Toro LGA
Umaru Abdullahi, male, 25 of Rimin Zayan, Toro LGA
Abdullahi Abubakar, male, 25 Rimin Zayan, Toro LGA
Mohammed saidu, male, 25 of Magama Gumau, Toro LGA.
Exhibit Recovered from them include:
One (1) AK 47rifle
Seven Rounds of 7.62 live ammunition
Four handsets of different variaties
In another development, on the May 14, at about 5:3pm, following intelligence report, police detectives attached to Ningi Division discovered a decomposed body of yet to be identified person at Yuga forest in Ningi LGA of Bauchi State.
One AK47 rifle with Breach No 3200962 and 27 live ammunition of 7.6mm was also recovered beside the copse. However, social welfare Department was contacted with the view in order to bury the victim after postmoterm examination.
All cases are under investigation after which suspects would be charged to court for prosecution.
Tweet