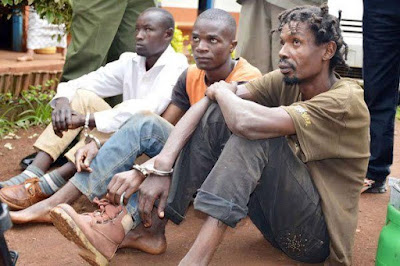 Police in Kiambu, Kenya last Sunday arrested a suspected serial rapist Laban Wekesa, believed to be part of a gang that has been posing as women while preying on victims.

The officers from Karuri Police Station in Kiambaa Sub-County also arrested three other suspects who are believed to be Wekesa's accomplices. One of them has already been positively identified by one of the robbery victims.

According to the police, Wekesa has also been engaging in robbery incidents Muchatha and Ruaka areas. Police who were working on a tip off from members of the public recovered stolen electronic goods, gas cylinders and mobile phones at his house in Muchatha.

Area police boss, Wilberforce Scharani, who confirmed the arrest said Wekesa has at least five rape cases that have been reported against him adding that they had unsuccessfully trailed him since January this year.

Mr Scharani said after his arrest, two of his rape victims positively identified him, and have already recorded statements. The police, he said, have a watertight case against the suspect.

"Already, we have five cases which we will file against him in court. Already we have two complainants who have already recorded statement and are expecting the remaining ones to come on board," Mr Scharani said on Monday.

Police said they tracked him using his mobile phone and those of some of his victims. He added that the suspect’s communications had implicated him in the rape cases. The suspect, according to the police, would wear women dresses to ensure his victims do not suspect him or get frightened.


"They would waylay women who were returning home late in the night and with the female dressing, the targets would even comfortably walk alongside them oblivious of their intentions.

"Somewhere along the way, the suspect would draw knives to intimidate and rape them before making away with their money and any other valuables," he said.

The gang is believed to be behind a series of robberies in the area, which Mr Scharani said had reached alarming levels.

Some of the victims have identified their items which included flat screen TV sets, computers, mobile phone, gas cylinders, and decoders, among other household goods.