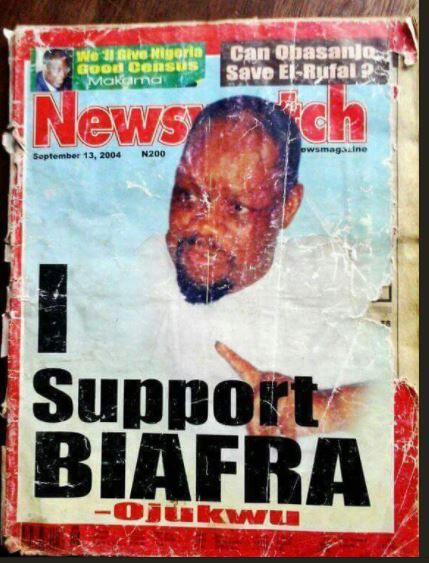 For the past 24-hours, elder statesman, Chukwuemeka Odumegwu Ojukwu has been a trending topic on Nigerian social media.

Ojukwu was mentioned in President Muhammadu Buhari's speech yesterday when he said, 'In 2003 after I joined partisan politics, the late Chief Emeka Ojukwu came and stayed as my guest in my hometown Daura. Over two days we discussed in great depth till late into the night and analyzed the problems of Nigeria. We both came to the conclusion that the country must remain one and united'.

A lot of Nigerians however didn't believe this paragraph from the president's speech and unfortunately, Ojukwu who led the Southeast as Biafra in a failed secessionist bid that caused a two-and-half-year civil war in the country between July 1967 and January 1970 died in 2011.

Now, a magazine cover of his 2004 interview with NEWSWATCH where he said, 'I support Biafra' has surfaced online bringing a new perspective to the discussion.
Tweet