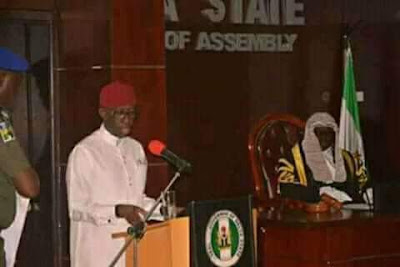 Governor Ifeanyi Okowa of Delta State, on Thursday, broke his long silence on the controversy trailing the operations of 2017 budget of the state.

The governor lashed at his critics, specifically his Agbor kinsman, Dr. Cairo Ojougboh, describing him as ‘unintelligent’ for referring to the 2017 Appropriation Bill as blank budget.

Ojougboh, a former national deputy chairman of the defunct Ali Modu Sheriff faction of the People Democratic Party (PDP) had accused Governor Okowa of running a blank budget for 2017, and challenged the governor to make public the details of the budget if there was any.

But fielding questions from newsmen in Asaba shortly after presenting the 2018 budget proposals to the state House of Assembly, Okowa said Ojougboh “though went to school but he is making unintelligent comments.

“I have been to the National Assembly and I believe that the Delta State House of Assembly is very credible. We have followed the due processes which we have again started for next year’s budget.

“Is it possible to have a blank budget? Then what is the budget if it is blank? So his comments appear stupid and unintelligent, but somehow we are in a nation where anybody can say anything because of freedom of speech.

“However, it is only fair that people who went to school should speak in a manner that we went to school. When we speak unintelligently, it is unfair,” Okowa said.

Ojougboh left the PDP last month to join forces with the main opposition party in the state, the All Progressive Congress (APC) in a bid to defeat the PDP in the 2019 governorship election where Okowa will be seeking a second term.

The former PDP chieftain, Ojougboh, has since assumed the role of the unofficial spokesman of the opposition party with frequent criticism of the programme and policy of the state government.
Tweet