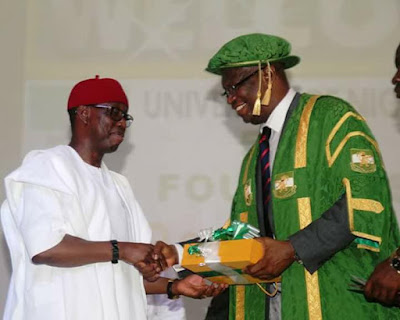 ACTIVITIES of the Governor of Delta State, Senator Dr. Ifeanyi Okowa to make life better for humanity has been recognised with the 'Dignity of Man Award' confered on him by the University of Nigeria, Nsukka.

The ceremony which was attended by the Governor of Enugu State, Hon. Ifeanyi Ugwuanyi saw the Sultan of Sokoto, Alhaji Muhammad Sa' ad Abubakar III, delivering the 'Dignity of Man' lecture titled, 'Restoring the Dignity of Man: Education as a veritable tool'.

Prof. Uchenna Azikiwe, wife of late sage and founder of the University, Dr. Nnamdi Azikiwe, former Governor of Cross Rivers State, Mr Donald Duke were among dignitaries who graced the award Friday (06/10/17) which climaxed activities lined up to celebrate the 57th Founders' Day celebration of the University.

Governor Okowa thanked the University for the recognition and called for equal, opportunities if the dignity of man must be restored.

"We will not be able to restore the dignity of man if we fail to give equal opportunities to all," he said, asserting, "restoring the dignity of man is something we all should think about, we should be conscious of our words and actions, we should continue to ensure that the things we do should improve on the self worth of Nigerians."

He emphasized, "it is my hope that we will stay together and build the country, what we need most is restructuring our minds from the leaders to the followers, there must be ways to empower our people because, economic insecurity is the worst thing that can happen to man; as long as the population is growing faster than the economy, the worth of man will not be what it is supposed to be."

Governor Ugwuanyi congratulated Governor Okowa on the award which Prof. Edith Nwosu had disclosed was given to the Governor, "for pioneering landmark policy reforms and inclusive transformation of Delta State."

In his lecture, the Sultan said sound education should be the beginning for a better future, asserting, "knowledge is light and the restoration of the Dignity of Man should be with the eradication of ignorance."

Chairman of the occasion, HRM Prof. Chukwuemeka Ike who went through memory lane, recalled that experience of Africans, discriminations in different forms caused the University to adopt 'Restore the Dignity of Man' as its motto.

He expressed joy that to a large extent the discriminations has reduced with a black man emerging as the President of the United States of America (USA) but, called for Africans to be proud of what they have and reduce imbibing of foreign culture.

The Vice Chancellor of the University, Prof. Benjamin Ozumba in an opening speech, said the annual lecture was designed to address the challenges facing the society and congratulated Governor Okowa for bagging the University's award. 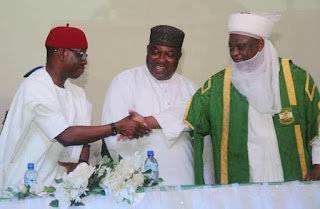 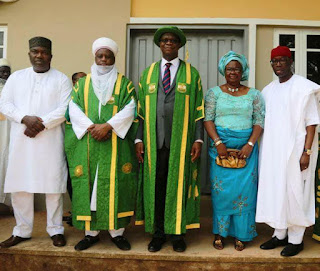