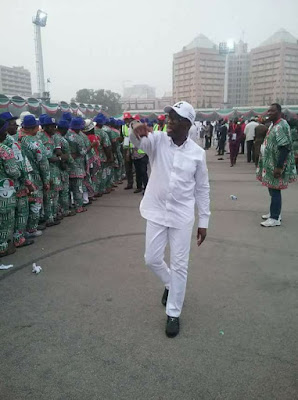 By Festus Ahon.CHAIRMAN of the Chairman of the PDP Convention Organising Committee, Dr. Ifeanyi Okowa, Sunday said the party would go into the future reconciled to take over power in 2019 “by the grace of God”.


Speaking shortly after the emergence of Prince Uche Secondus as National Chairman of the party, Okowa who is the Governor of Delta State, said “PDP has had a very credible election”.

He thanked leaders of the party, the Governors forum, the Independent National Election Commission, INEC, security agencies, candidates that contested for different positions, the press and all those who contributed in different ways to make the convention a success.

Chairman of the electoral committee for the convention, Mr Gabriel Suswam, former Governor of Benue State described Governor Okowa as a workaholic whose drive made it possible for the PDP to have the best convention since the formation of the party in 1998.

Suswam said; “this is the first ever very transparent election convention that the PDP has ever had, it took Governor Okowa a lot of military tact for us to have what we have today.”
Tweet