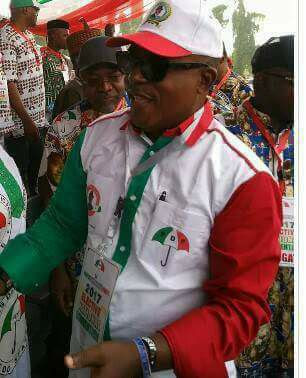 Speaking after he was sworn-in following his victory at the PDP National Convention at the Eagle Square in Abuja on Sunday , Prince Uche Secondus argued that the APC's failure is premised on the party's flawed foundation and lack of ideas of development.

He said, “In the words of the 34th President of the United States of America Dwight Eisenhower, ‘If a political party does not have its foundation in the determination to advance a cause that is right and that is moral, then it is not a political party; it is merely a conspiracy to seize power’.

“Judging from this, it is crystal clear to all Nigerians, that APC is not a political party, but a body hurriedly assembled to seize power without a clear-cut plan for governance.”

He noted that the Peoples Democratic Party remains the only credible alternative that was founded on the platform of sustainable development.

“Those founding fathers had in mind, a prosperous and lasting democracy as captured in the preamble of our constitution, clearly stating their desire for a free and egalitarian society,” he said.

“Even in our perceived failure of 2015, we chose to abide by our strong faith in democracy, willingly conceding power to opposition, thereby elevating the democratic status of Nigeria. We are true democrats.

“I can, therefore, say without an iota of doubt that PDP’s contributions to the growth and sustenance of democracy in this country in the last 18 years remain unequalled,” he said.

The PDP National Chairman assured PDP members that the National Wooking Committee would lead the party to electoral victory in 2019.

He said: “With your mandate, I assure you that all necessary steps will be taken to avoid a repeat of our past mistakes. Indeed, we have learnt our lessons and by this convention, we are now set to forge a new path for our great party and Nigeria,” he said.

“Under my watch, internal democracy will be strictly adhered to with a deliberate policy to return ‘real’ power to the people. No more imposition, no more impunity. Every member of this party can from this moment consider him or herself an equal shareholder in our common destiny.”

He lauded those he defeated for the post of National Chairmanship, urging them to bring their experience in the ŕevival8

“You have every cause to stand tall and I now extend my hand of fellowship to you all. Let ‘Us’ rebuild, reposition and regain,” he said

The swearing in of the Newly National Chairman and other officials of PDP was performed by seasoned lawyer, Eyitayo Jegede (SAN).

Rivers State Governor, Nyesom Ezenwo Wike congratulated Prince Uche Secondus and members of his executive committee on their well deserved victory, saying that the party will be re-positioned for greater service to the country.

He said that Prince Uche Secondus emerged through a credible process which will further strengthen the bonds of unity in the party.

He noted that Prince Uche Secondus comes into leadership with a track record of service and loyalty to the party, pointing out that the new party chairman and his executive committee will rebuild the PDP.

One of the contestants of the post of the National Chairmanship, Chief Raymond Dokpesi said: "I write to thank you most wholeheartedly for voting at the just concluded Elective National Convention in Abuja.The delegates have spoken.I congratulate the newly elected Prince Uche Secondus led National Working Committee. You will recall that i said that the PDP must be the ultimate winner at the end of the contest.God bless the Peoples Democratic Party.Congratulations PDP as i wish all our members the best of luck. "