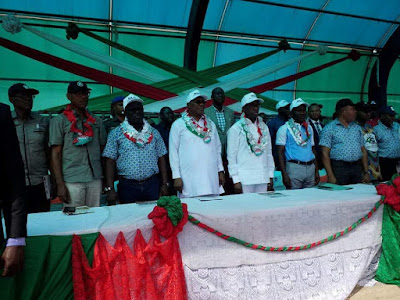 AS workers’ day was celebrated all over the world on Tuesday (01/05/18), Delta State Governor, Senator Dr. Ifeanyi Okowa has said, workers are valuable assets in any policy, programme and project implementation.

Governor Okowa amidst applause from cheering workers reeled out his administration’s achievements in meeting with his electoral promises to workers at the celebration which took place in Asaba. The Nigeria Labour Congress (NLC) and Trade Union Congress (TUC) organised the event which featured march past by members of their unions.

According to the Governor, “this administration is constantly aware of the sacrifices of workers and their contributions to the development of our dear State and country; our workers remain unarguably very important assets in any policy, programme and project implementation that is why the present administration has sought and will continue to seek the hands of labour so that together, we can attain the enviable heights of progress in our beloved State.”

“I sincerely request your (organised labour) cooperation and understanding as partners in progress; we are always conscious of ensuring harmony to bring out the best in the workforce and I assure you that working together, this administration will continue to protect workers' rights and shall promote incentives for greater productivity leading to greater prosperity,” the Governor said.

He continued, “my dear workers, you are no doubt aware that the State government has approved owner-occupier for the workers residing in the junior staff estate; at the same time, the buildings on the new housing estate on Ibusa road are to be completed and handed over to workers; the present administration has continued to keep our promises to our workers; we are paying salaries promptly, and when the next Paris Club money is received, we shall assist the local government councils that are indebted to their workers to pay off all that they owe.”

The Governor at the event, announced the appointments of 9 permanent secretaries and the appointment of Mr Tony Obuh and Mr Lawson Efenudu as Chairman and Executive Secretary respectively of the Delta State Pension Board.

Governor Okowa also, thanked civil servants for their cooperation in ensuring that the clock – in, clock – out mechanism introduced in the state was effective, stating, “with the clock-in arrangement, we will ensure that only those who work receives salaries.”

Chairman of the NLC in the state, Comrade Jonathan Jemirieyigbe at the event, said, “the theme of this year’s event is, ‘Labour Movement In National Development, Dare To Struggle, Dare To Win;’ "our Governor while I assure you of the workers continuous support to your administration, the organised labour in the state appreciates the giant strides your administration has made in the past three years through your SMART agenda.”

Comrade Chinedu Nwobodo who is the Chairman of TUC in the state in an address at the event, thanked Governor Okowa’s administration for “paying salaries of workers regularly especially in the trying year of 2016 when the economy was at the verge of collapse.”
Tweet