Home » Local » Plateau Killings: Niger Delta Militants To Go After Herdsmen and Miyetti Allah Cattle Breeders’ Association, If Nothing Is Done In 21 Days

Plateau Killings: Niger Delta Militants To Go After Herdsmen and Miyetti Allah Cattle Breeders’ Association, If Nothing Is Done In 21 Days 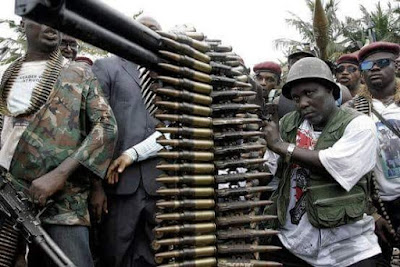 A coalition of Niger Delta militants, yesterday, gave the Federal Government a 21-day notice to end killings in the country.

The group lamented the recent killing by herdsmen in Plateau State.

The militants, who met at Ikot Abasi, Akwa Ibom State during the weekend, also tasked the Federal Government on protection of lives and property of Nigerians.

The militants warned the Federal Government that there’ll be doom if failed to forestall anarchy and further bloodshed.

They declared a 21-day mourning period for those massacred recently in Plateau State by rampaging herdsmen, and threatened to declare herdsmen and Miyetti Allah Cattle Breeders’ Association enemies.

A statement by leader of the coalition, W.O I Izonebi, read, “As agitators with conscience, we take lives of fellow Nigerians sacrosanct as no amount of provocation will lead to the slaughtering of innocent Nigerians because of cows.

“We, therefore, declare 21 days of mourning for the innocent Nigerians killed in Plateau State by foreigners trained by late Gaddafi that are now masquerading as herdsmen, according to our President, Muhammadu Buhari.

“We urge the government to do the needful before the expiration of our 21 days of mourning to avoid a total breakdown of law and order because it seems we do not have law, and government is unable to implement its primary responsibility of protecting lives and properties of its citizens.

“We demand implementation of the following to avoid doom and more loss of lives: The immediate devolution of power to states and regions to enable governors discharge their primary responsibility of protecting lives and properties and declaration and proscription of the Gaddafi mercenaries masquerading as herdsmen as a terrorist organisation.

“The government and security agencies saddled with the responsibility of protecting Nigeria and its territorial integrity should apprehend the perpetrators of this heinous crime against innocent Nigerians and humanity; total overhaul of the security organisation and security chiefs, immediate arrest of the Miyeti Allah Cattle Breeders Association leaders and its disbandment with immediate effect.

“We also condemn the inability of the government and securityagencies to protect its citizens from foreigners masquerading asherdsmen committing genocide in the Middle Belt of our dear nation, Nigeria.

“We are not going to fold our arms to see foreigners masquerading as herdsmen slaughter and kill hardworking Nigerians that are going about their legitimate businesses and livelihood anymore, when we have a democratically elected government in place.

“We are bold to ask these questions? What is the primary responsibility of government? Why is nobody being arrested and prosecuted for these killings? As agitators with conscience, we take lives of follow Nigerians sacrosanct as no amount of provocation will lead to the slaughtering of innocent Nigerians because of cows.

“We, therefore, warn that after this 21 days of mourning is over and nothing is done, we, the good people of the Niger Delta, and coalition of agitators will have no choice than to declare herdsmen and Miyeti Allah Cattle Breeders Association enemies of the Niger Delta and Nigerians in general.

“Therefore, we do not wish to see them in any of the Niger Delta states because the pollution and degradation of our farmlands and the polluted waters and rivers are enough provocation, let alone seeing our mothers and sisters in a life threatening situation and being killed by cattle breeders, while the Miyeti Allah is applauding them because they value the lives of cows more than human lives.

“Enough of this carnage going on, we should use this 21 days of mourning to reflect and ask the question, if we are truly a nation where the life of a cow is more valuable than human life.”