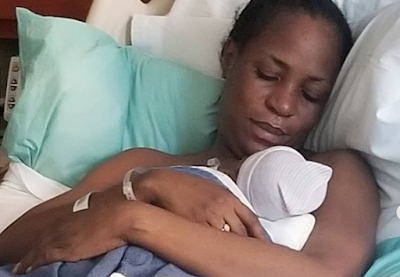 Linda Ikeji has just revealed his son’s surname which wasn’t far from the truth that was revealed in May. The almighty Jeremi who has been connected to Linda’s pregnancy is the father of her son, Baby Jayce Jeremi.

The excited mother revealed the son’s surname when he treated his 2.3 million Instagram followers to the picture of herself wrapping the new born in her arms. She captioned the picture.

“Going home with my prince. Beginning of the best years of my life! His name is Jayce by the way, Jayce Jeremi. . Will share pictures soon! .”


Going home with my prince. Beginning of the best years of my life! His name is Jayce by the way, Jayce Jeremi. . Will share pictures soon!
A post shared by Linda Ikeji (@officiallindaikeji) on Sep 19, 2018 at 9:50am PDT

A few days ago, the news about the arrival of Africa richest blogger first baby broke the internet but the most juicy part of it is the revelation of Linda’s baby Daddy’
Linda Ikeji’s ardent followers have all had sleepless nights trying to figure out who her hubby is, some of my friends too have been calling me if i have any info, including fellow bloggers, i replied that i dont know, But looks like we have gotten a sneak peak, that’s if the post has any truth to go by. This goes to prove linda’s latest post on social media before the arrival of her baby post on Instagram has mentioned where the father of her son is from.
She wrote:
Mummy-to-be to a future Itsekiri big boy …
So it’s obvious her babay Daddy is allegedly business mogul and coded Lagos big boy, Sholaye Jeremi. It is rumored that these two have been longtime lovers, since 2016. While Linda preached celibacy to naive young girls, she was ‘getting her engine oiled’. Furthermore our grapevine say that his “money senior Linda own”, as he is a discreet player in the petroleum industry and has been identified as the man behind the oil deals of the Minister of State for Petroleum Resources, Ibe Kachikwu. Hence she may have benefitted from his largesse, generosity and connections, in her quest to build her impressive empire.

Although his wealth is the kind that must stay hidden and away from the limelight because an investigation into its source, may unearth unsavory secrets – not just his, but those that are his close consorts. To survive, it is imperative that Sholaye Jeremi stay out of the public eye. Therefore this revelation as the father of Linda’s child does him no good. It is expected that powerful associates of his, will begin to distance themselves from him, as they do not need his publicity. Clearly living a life of secrecy is a reason for Sholaye Jeremi’s financial survival.
Our source also allege that Sholaye Jeremi is in his 40s and he has a family sequestered in Mayfair London. If he is yet married to his wife and mother of his children, it unclear. He left London and came to Lagos Nigeria where he has made it big. He lives in Banana Island Ikoyi, so it has been easy for he and Linda Ikeji to carry on their secret love affair for such a long time, away from the public eye.

Our source also allege that Linda in the years she had been with the warri born business man, tried to manipulate her way into matrimony with Sholaye Jeremi. The latest being, getting pregnant for him.
A close source in the know said that when she told Sholaye of her pregnancy, clearly letting him know she would not be getting an abortion, he agreed but asked her to keep it low key. An agreement she has clearly reneged on, because she thrust herself in the limelight, in her bid to get public validation. Her systematic quest for validation began with her secret engagement and next the revelation of her pregnant state, complete with a baby bump as proof. With her words, “I want it all”.
About Linda’s alleged engagement to her supposed mystery suitor; i.e Sholaye Jeremi, that never happened. Even her (Linda Ikeji) father had intervened in the matter, to get Jeremi to marry her,in a bid to save her the shame of being like the other baby mamas she has crucified on her blog, all to no avail. Thus this is her last desperate attempt to emotionally blackmail him by drawing publicity to a fake engagement and then her very real pregnancy, to get him to do the right thing.
Our source further allege that a reason Sholaye Jeremi is not keen on marrying Linda Ikeji, is the fact her rather public life is unattractive to him,especially in his line of business, plus he is still a man about town, with several girlfriends in tow and he is not ready to be tied down. Jeremi is forever with a new girl each day of the week, consequently a marriage to a very public figure is tantamount to enslavement for this philanderer with a wandering eye.
In her desperation, our source alleges that the paternity of her child was leaked by none other than Linda. If she could keep her pregnancy well into its second trimester a secret, she very well would have kept the paternity of her child a secret too. Accordingly the leak came from the blogger, in a calculated risk to get him to bend to her will.
Tweet