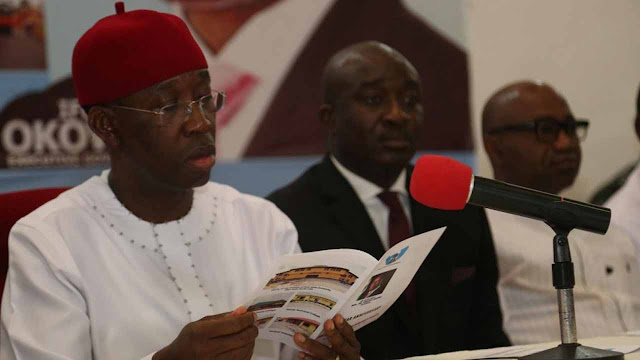 Delta Governor, Ifeanyi Okowa have promised Nigeria’s Super Eagles N9.1million ($25,000) for each goal they score against South Africa in the return leg of the 2019 Africa Cup of Nations qualifier at the FNB Stadium in Asaba.

The Governor made this known while addressing Super Eagles players at the Stephen Keshi Stadium on Tuesday.

Delta State governor, Ifeanyi Okowa made the pledge when he visited the team on Tuesday after training at the Stephen Keshi Stadium in Asaba. 22 players trained today with Bordeaux of France player, Samuel Kalu still expected.

The governor follows in the footsteps of Akwa Ibom , Udom Emmanuel who gave the team $10,000- for each goal they scored throughout their matches of the 2018 FIFA World Cup qualifiers.

The Eagles top Group E with nine points from four matches, a point ahead of South Africa who are second. They now need only a point to qualify for the tournament next year. Libya and Seychelles are the other teams in the group.
Tweet