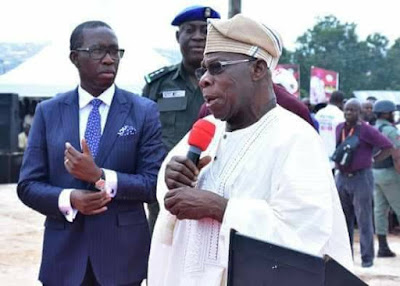 The former President who had earlier commissioned the dualised old Lagos/Asaba road, from Emuhu junction to Agbor-Obi junction, the dualised Owei-Ekei/Owa-Alero road, from old Lagos/Asaba road to Owa-Alero round about before moving to Asaba to commission the Stephen Keshi Stadium, observed that with the stadium, Delta State will continue with its winning streaks in sporting activities.

Apparently excited with the quality of projects seen, the former President danced to the admiration of large spectators including the Asaba traditional council of chiefs who turned out for the commissioning exercise.

While commending Governor Okowa for constructing such an edifice, the former President stated that the stadium would also, provide avenue for people to exercise, stating, “whoever you are, whatever age you are, you must exercise, you must be fit.”

He observed that the stadium would boost the economy of the state and urged Governor Okowa to add hostel facilities in the stadium for people to live in the stadium and have opportunities of training round the clock to enable them become future world champions.

“We must catch them young, we have the facilities, we have to recruit those who will win, train them from young age,” he said, adding, “build a hostel where you will put people that you will train day and night and they will be going to school from the stadium and in whatever sports, Delta State will be the best.”

“I was here to perform the ground breaking ceremony of the stadium, I am here to commission it and I will be here again to see the hostel,” he stated, asserting, “Governor Okowa is not just a Road Master, he is also a Stadium Master, and because of the work he has done, he is also the Bulldozer.”

Chief Obasanjo thanked the governor for giving him the opportunity to come to the state and commission projects.

Governor Okowa had thanked the former President for commissioning projects in the state, attributing the success stories of his administration to the handiwork of God.

“Beyond entertainment and sports tourism, we must try and grow the local economy and this stadium is one of the ways of growing the local economy, for every sporting activities that take place in the stadium, a lot of socio-economic activities are witnessed,” he said, adding, “the fact that the Super Eagles trained here, an international flight took off from Asaba to Johannesburg, by the grace of God, we will work with private concessional to make Asaba airport truly international airport to grow our economy.”

The Asagba of Asaba, Prof. Chike Edozien, represented at the occasion by the Iyase of Asaba, Chief Patrick Onyeobi thanked Governor Okowa for his interest in the development of Asaba and other parts of the state, observing that since the coming of the governor, Asaba is wearing a status befitting a capital of an oil producing state. 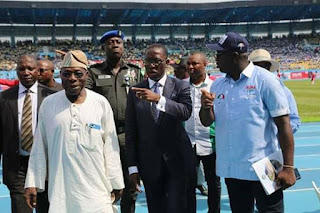 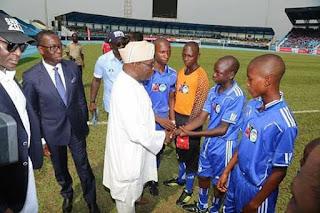 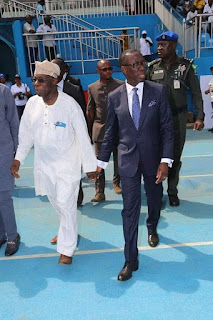