Posted by Aniomawatch Posted on 23:52 with No comments 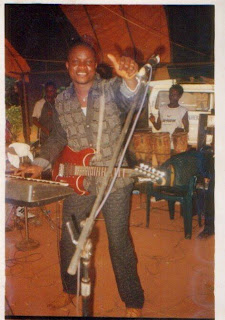 Patron Gabby ( Gabriel ) Ogbekile, is a Registered Nigerian Pman. He was born in Igbanke, orhionwon local government area of Edo State, Niegria. He started his music careers during his young age at 15 years old and was playing with his uncle, Sir Victor Nwanbi Eluehike. He attended his secondary schools at the same time as he was playing with his uncle. After his secondary schools academy, he joined with his elder brother Ambassador Felix Ogbekile, who also played with King One Nigeria Isaac Eluehike (uncle) and both of them formed a union in the year 1995.

In the year 1998 their younger brother Jude Ogbekile joined their group. Jude Ogbekile was formerly playing with their most senior uncle Chief Ucheka Eluehike as he was attending his university programs at Delta State University and later graduated from Ambrose Ali University, Ekpoma edo state. In the year 1999, Patron Gabby Ogbekile and his immediate younger brother, Jude Ogbekile now formed a group and were together before Jude travelled to Europe. Patron Gabby Ogbekile has released alots of albums including: ANWAN APALI (Children raises the parents at old age), Onyen run ori (When you work, you eat), Nwanem Erile Zum (my brother should not eat and forget me), Nwane Ele oya ( Brother is not a forbiden thing), Ashawo kama egedi oremeciga (when a prostitutes get old, she will start selling cigarettes), Ihien-onyen rio chukwu ( what one asks God), Ihian eke ri uya (Human being are supposed not have suffered if not God), Egho le Nwa ( Child and Money), Ne yen Asuor (lets be happy together) and lots more. Patron Gabby Ogbekile is a crowned chief in his home town Igbanke as he is called ( CHIEF ONYEN GBAYE EBON ), This title was derived from one of his hits albums and due to his respect for elders in the family and outside.

He is a happy married man with one wife and two children. He lives responsibly and he is different from other musicians that got married to many wifes. He attends alots of shows due to his performance on stage.
By: Frank Ofili