Posted by Aniomawatch Posted on 14:18 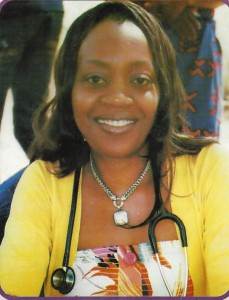 The need for health care centre at Igbodo brought the great event that happened on the February 23, 2013 at No. 1, Okoh Quarters, Ndobu Village Igbodo, Ika North East Local Government Area of Delta State.
It was a great event indeed in memory of late Stephen Uche Okoh (Srn), hy her daughter Dr (Mrs.) Isioma Okobah who built a modern Hospital for the community an experience that the people of Igbodo community will always remember.

With this kindness, the people of Igbodo and its environs that cannot afford to travel far distance for healthcare can now benefit from the gesture of Dr. (Mrs.) Isioma Okokah.

Speaking at the occasion, Dr. (Mrs.) Isioma Okobah who contested for the House of Representatives election in 2011, said that the primary health care centre is the bedrock of care-taking system, so that the people of Igbodo and its environs will now have access to health-care, services. She also expressed gratitude to those who worked tireless for the success of the hospital, especially to his husband Sir Christopher Okobah.

Commissioning the hospital, His Excellency Prof. Amos Utuama (SAN), Deputy Governor, Delta State, said that he gave every excuse humanly possible not to be at the occasion and that the excuses were genuine.
However, he said that the excuses turned out to be in favour of the people of Igbodo community.

He congratulated and prayed for Dr. (Mrs.) Isioma Okobah, her husband, the people of Igbodo and the Stephen Okoh family for the initiative of opening Stephen Okoh memorial Health Centre in Igbodo.

He further said that a lot is to be learnt from what Dr. (Mrs.) Isioma Okobah has done in Igbodo.
“The first which is the most important is that in life you must have a Hero and once you have a Hero, welther alive or dead you must do anything possible to set against the memory of your Hero.

He thanked Isioma Okobah to find in her father a Hero. He put the effort of Dr. (Mrs.) Isioma Okobah in larger perceptive, saying that in Delta State there are three point Agenda-Peace and Security, human capital development and infrastructural development within the component of Human Capital Agenda, that there is three important free health care agenda which enable Deltans to actualize his/her aspiration in life in any field of his/her life endevour which is the free medical health programme.

The chairman, Senate Committee on Health, Senator (Dr.) Ifeanyi Okowa while addressing the people, congratulated Dr. Isioma Okobah for her guesture, saying that Nigeria has high rate indeed of mortanal maternity rate infant immortality and that with such guesture the maternal mortality of Igbodo Community and Nigeria at large will be reduced.

Speaking at the event Obi of Igbodo advised people of Igbodo, saying that if Igbodo is good, it is good for all admonishing that they should put hands together to protect and preserve the facilities.

Music and dance was supplied by Joe Morgan and the people of Igbodo, who jubilated throughout the day.