Posted by Aniomawatch Posted on 07:55 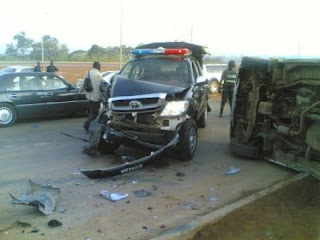 The Nasarawa State Commissioner of Police, Mr Umar Shehu, has confirmed that the convoy of President Goodluck Jonathan was involved in an auto crash, leaving 14 persons injured.

According to the eyewitnesses, three conventional policemen, three mobile policemen, one member of the civil defence corps, as well as one official of the state branch of the National Youth Service Corps (NYSC) and six civilians were “seriously injured”.

Mr Shehu claimed the state government had since released funds for the treatment of all the victims. He added that some of the victims have been discharged but those who have serious fracture were still at the Dalhatu Araf Specialist Hospital, Lafia.

According to him, the accident happened when the vehicle of a prison officer ran into the convoy of the president and collided with one of the riders, who somersaulted and thereafter ran into the crowd.

“They are all responding to treatment at the hospital. Some have fractures on their legs. The prison officer sustained minor injury. He is still in police custody while investigation is ongoing,” he said.

It will be recalled that the president was represented in Lafia for the inauguration of the newly constructed Federal High Court and Ta’al Model School constructed by the present Governor.
Tweet