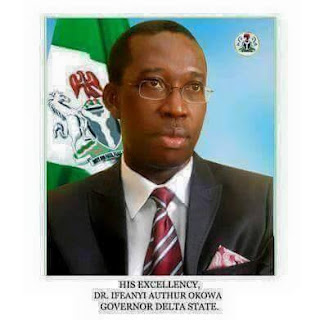 IKA WEEKLY
The bill was signed on Thursday, August 18, 2015 by the governor in the presence of the Speaker of the Delta State House of Assembly, Rt. Hon. Monday Igbuya and the Deputy Speaker, Hon. Friday Osanebi, other principal officers of the House as well as the Secretary to the State Government, Hon. Festus Ovie Agas.

Governor Okowa thanked God that the amendment Bill after a rigorous process has been signed into Law and it would tackle the challenges of oil producing communities in the state.Speaking after signing the amendment bill into Law, Governor Okowa said, “You have just witnessed the signing into Law of the DESOPADEC amendment Bill 2015 to the original law of 2006 establishing the Delta State Oil Producing Areas Development Commission. This amendment bill was forwarded to the House of Assembly in the course of this administration a few weeks ago and we want to thank God that the House has completed the process of passing into law the amendment bill of 2015 to the original DESOPADEC law.”

“There was a lot of interest when this bill was presented to the House of Assembly and as its customary of Deltans who are very bright and vibrant, a lot of people showed interest and they had the opportunity to contribute their quota towards a robust commission” he said.

He added “I want to thank God that the Delta State House of Assembly took the bill to public hearing and Deltans made their contributions to enrich the bill, there was a lot of engagement and misconception that arose from the fact that some people did not even know what was in the original law and did not know what was contained in the amendment bill that was sent to the House. We thank God that at the end, the bill was in the best interest of Delta State and the oil producing communities in particular.”

The governor noted that, “through this law, we are now establishing a management team for DESOPADEC which will meet with the expectations for which the commission was initially established, membership of the Board remains but now, we have brought in a management structure that can see us through to the future of the commission that we all desire, a commission that will be structured to impact positively on the lives of our people in terms of infrastructural development, social services and economic services.”

The Governor while commending members of the Delta State House of Assembly for their proactive approach to law making called on them to continue to stay vibrant and ensure that they continue to collaborate with the executive arm towards impacting more positively on the lives of Deltans.”

The Governor disclosed that, “there is also another bill in the House which is the Delta State Contributory Health Insurance bill and it is our hope that the House is able to speedily pass that bill into law so that our people will benefit from the intentions of the bill.”

Continuing, “he said it is our hope that despite the challenges of the moment, we will stay focused in bringing prosperity to our people, not only in ensuring a healthy people but in the economy of the family and the development of different sectors of our state.”

Earlier, Rt. Hon. Igbuya had said, the bill was properly looked into by members of the House inspite of all the controversies surrounding the presentation of the bill.

Hon Igbuya observed that the controversies made the members of the public to understand that the bill has no harm, instead, it was actually to bring out the good intensions behind the creation of the commission.
Tweet