Home » Local » COMMISSIONERSHIP IS SIMPLY A COMMISSIONING UNTO UNINHIBITED STEWARDSHIP

COMMISSIONERSHIP IS SIMPLY A COMMISSIONING UNTO UNINHIBITED STEWARDSHIP 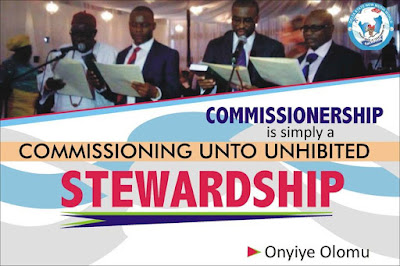 Looking at the array of Commissioners appointed by Gov Okowa of Delta State,one is left in no doubt that His Excellency understands the ramifications and enormity of the Mandate he bears. These are men and women who posses and parade consummate and proven integrity, craft,skill and intellectual property.

However, in the past that we have seen Commissioners perform woefully,it had been largely traceable to factors like: the perception that political office is PRIMARILY given as one of political patronage, reward(that is,for assisting the Chief Executive to capture power etc) and for the purpose of utilizing same to amass wealth illegally. This scenario further precipitates or births another factor :the usually pervasive and progressive nonchalance,dithering, slowness and so on that political appointees exhibit while in office.

Anyway,one assurance that we have as Deltans is that Gov Okowa has said it countless times that he is never going to accommodate any political appointee whose actions and inactions will serve to enervate or dampen his drive,energy and commitment towards the actualization of his Prosperity for All Vision. This is reassuring enough for us with hindsight that Ekwueme has a pedigree that shows him as a man who matches his word always,with commensurate action.

Well,as one of the online stakeholders, I can safely presume that Gov Okowa would not applaud us if all we end up doing as contributions to his Government is to post( especially in sycophantic manners),ONLY eulogies and praises for his appointees without balancing it up with well-intentioned and articulated critique, suggestions and better alternative courses of action that will all sum up to move Delta State to greater heights.

I think as an individual that Delta State and her interests are far GREATER,MORE IMPORTANT and MORE DEMANDING than those of any political office holder,individuals ,groups and the likes . Therefore,everyone of us must show through whatever means possible that we recognize the sanctity of our Dear Delta State in the scheme of things.

In all,we are deeply optimistic that in the Administration of Sen Dr Okowa,that never again shall it be said that Commissioners and ALL other political appointees -through their deeds in office-took Delta State and her peoples for a ride.