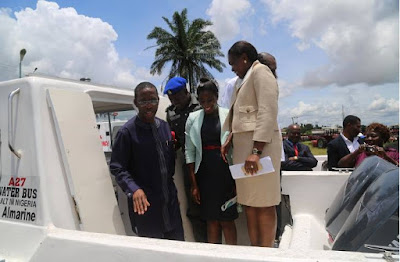 GOVERNOR Ifeanyi Okowa’s effort towards effective and affordable health care delivery for Deltans has got a boost with the donation of three ambulances to the state government.

The Governor while receiving the ambulances from Dr Zolibe Anyamele, Programme Assistant for Subsidy Reinvestment Programme (SURE-P) in Asaba observed that they would give a boost to the health care programmes of his administration. Two of the ambulances were water ambulances while one is for land.

He stated that the ambulances would be deployed to the riverine communities where they are needed asserting, “they are going to serve cluster communities in the areas of their operations.”
While noting that the donations of the ambulances “are right steps in the right direction at the primary healthcare level,” the Governor reiterated, “that does not take away the challenges that come with it because for now, we do not know whether SURE-P is still going to stay funded because its primarily source of funding is not available.”

Senator Okowa emphasised that though primary healthcare centres were the prerogative of the local government councils, that tier of government was witnessing a lot of challenges as a result of poor funding.

“Ordinarily primary healthcare centres would be with the local government councils but the councils now cannot even pay salaries, it is only four out of our twenty five local government areas that are stable financially at the moment, the rest twenty-one are challenged and that is the kind of difficult situation that we find ourselves,” he said.