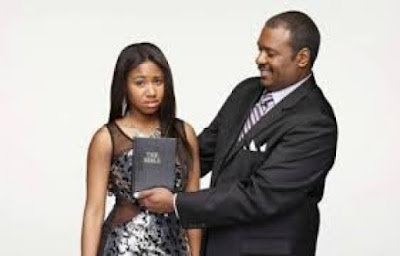 After that first episode with Chioma, we started f*cking all around the house like newly weds. Every moment we were alone, we would be in each other's arms, either totally nu. de with me thrusting hard and fast into her or partly clothed while she sat on my d*ck and rode me joyfully.

Sometimes she would be in the kitchen preparing dinner and I'd sneak in behind her and grab her *ss. She would gasp and tell me to stop the act seeing that my parents were in the sitting room watching the 7o'clock news. I didn't care, I just wanted to have more orgasms. And since I couldn't go out and ask any other girl for it, I wanted to exploit my one and only source till it dried up like a well that had run out of water.

We had been at our hide-and-smash game for a little more than 2 months when she suddenly became cold towards me. Every time I tried to initiate s.ex, she would refuse. She started locking her door before she slept so I couldn't sneak into her room anymore. Once while she was bathing and I walked naked into the bathroom with the full glory of my erection in view, feeling like a walking Greek sculpture, she screamed at me and told me to leave.

Even threatened to say to my folks that I tried to rape her if I refused to leave. My very last attempt was when I tried to do the "kitchen sneak" on her. I had tiptoed to where she stood busy with what she was doing and slid my hand beneath her skirt, reaching for her crotch with my fingers and trying to slid a finger into her when she'd turned around quickly, brandishing the knife she'd been chopping carrots with, intending to cut my head off. I'd quickly dodged and the knife had slightly cut me just at the side of my face. I stepped back with fear as she pointed the knife at me with a scowl on her face to show she had meant it.

I was angry, but at the same time, didn't want to do anything that would attract my parent's attention towards Chioma and I. After that incident, I never attempted to touch her again. It wasn't until a few days later when I came back from School to hear my Mom screaming at the top of her voice at Chioma. I later eavesdropped on the conversation, I realized that she had caught Chioma vomiting into the toilet at the early hours of the morning. From what I'd watched from numerous nollywood movies at the time, I realized then that Chioma was pregnant.

At first, the news hit me with such dreadfulness that I just went into my room and sat on my bed, wishing that all the events of the past few weeks never happened. That first orgasm, the many after it, all the sexcapades we had enjoyed. The slamming and the thrusting, the damn p*rn CDs Angela had given to me. I just wanted to undo everything. If Chioma was pregnant, then the seed within her was surely planted by me. It never occurred to me that someone like Chioma could be letting other dicks that were not mine to penetrate her coochie.

In my childish mind back then, she was mine alone. Only I had access to that sweetness between her legs, I had thought.

I had believed she was too humble and too obedient to my Mom to actually be f*cking other guys while she stayed with us but it became clear to me, when she mentioned the name of two guys she'd slept with under much lashing of whip by my mother. She never mentioned mine, and I just kept my mouth shut while she was being forced to spill the whole truth.

At the end of it all, she had to leave. My mom told my dad that she was never getting another maid, which meant my doing of house chores returned. This time, I didn't complain. I obeyed my mother's every command, just like the bible said I should.

Like I was trying to please God so he wouldn't reveal the grave secret of my sinful acts with the now departed Chioma. I think that was the reason.

With Chioma gone, I had returned back to where I was, the miserable loner who couldn't have a girlfriend. The boys in my class still told stories of their sexual deeds. I had one to tell as well and felt that I should, but I kept my mouth shut and just listened but the more I listened, and thoughts of Chioma came to me, my mind just wasn't at rest. I had a boner every time I saw a lady that appealed to my sexual senses.

I bought a p*rn CD each week, after watching it and jerking off to it, I would destroy it. My libido had become something else. And every time I laid eyes on a pretty lady, sexual thoughts would get in my head that very moment. I was beginning to wonder if something was wrong with me.

In Church the next Sunday, the pastor preached on sexual immortality and how to overcome it. I listened with much rapt attention and hoped to overcome the constant urges that I had to sleep with any lady I set my eyes upon. If I hadn't been such a shy guy who couldn't even have a decent conversation with ladies, talk less of goading them into having sex with me, I wonder how many I would have slept with at such a "tender" age. At the end of the Pastor's sermon, I felt renewed and assured that I could resist the desires of the flesh.

Well, that thought was held strongly to heart by me until a few minutes later when I saw somebody I hadn't seen in a while. Victoria, the Pastor's third daughter........
Tweet