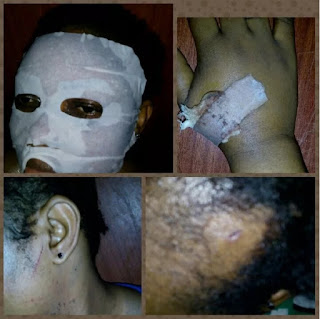 Next time you consider asking for a lift, check if the trunk of the vehicle is empty, and if it is possible to open the doors from the inside: your driver may be a thug waiting for his next victim. Lara Owoeye-Wise, a broadcaster and writer, posted an account of a dangerous encounter her friend had in Abuja, and urged Nigerians to be more security-conscious and vigilant.

“Criminals have become extremely desperate and have perfected their acts to evade suspecting eyes and security watch,” Ms Owoeye-Wise writes, prefacing her narrative.

A friend of hers was assaulted by a cab driver in Wuse district of Abuja. The woman was stabbed several times with a knife and a screwdriver, and is still recuperating, Ms Owoeye-Wise says.

Below are the photographs of the injuries the victim of the assault sustained (warning: viewer discretion is advised, as some may found the images disturbing. The story continues after the photos).
The woman flagged down a cab and, not suspecting anything, entered the vehicle after negotiating a fare.
“You sit at the back or in front and the cab moves,” Ms Owoeye-Wise writes. “The driver applies the child lock button. Then, from the trunk of the car, a criminal accomplice who has all the while been quietly coiled up there, moves into the car from the back seat, and then you realise you are not alone after all”.
Efforts to open the car door by force are often futile, Ms Owoeye-Wise notes, since the door knob would be damaged with the intent to trap the passenger inside.

The woman, however, fought back: she chocked the driver from behind, and the car ran into a ditch, and which the thugs were apprehended.

“I always teach that once you enter a cab, close the door and try opening from inside before the driver moves. If it doesn’t open, tell the driver you are no longer going. Now I have added the opening of trunk to my assessment list,” Ms Owoeye-Wise concludes.
Her Facebook friends and followers have shared their own stories of horror as well.
“Not very bad compared to the nightmare at Agboroko, Igbo-Elerin, and environs. Here the robbers call themselves the ‘one million boys’. They are very deadly. When they move, they are not less than forty boys at once,” one commentator remarked.

“The person that attacked a DSS woman I know came from the backseat and used wire mesh to suffocate her. They disarmed her and pushed her out of the moving car, but her gallantry paid off. She fought for her life until the cab ran over a kerb and right into a ditch. The criminals made for it. But later on, the owner of the car and 17 other accomplices were arrested at Utako and Makurdi.”
“My friend [experienced] almost the same thing, but she was alone with the cab man when suddenly the cab stopped at a coner and the friver begged my friend to allow his own friend to join them because it was late. Out of pity, she allowed the guy enter, not knowing the two of them planned it. She was beaten and they took all her belongings.”

Others have pointed out that such crime pattern is not new.
“I was a victim of such on 2nd February 2009. I took a cab around 6am, from Lobito Crescent, Wuse 2, to take me to Berger. [The driver] was [alone in the car] as I dropped my big Ghana-must-go [bag] … it contained all my things as I was to resume school … He was friendly, gisting with me and even teasing that I had packed everything from home and taking them to school. He then said he wanted to follow that road by NEPA office, Zone 4. When he entered that bend, he slowed down and stopped, only for me to see another [man] appear from the boot, come down and open the side of my door as I was seated in front. The driver collected my handbag, and his accomplice went straight to my pocket to see if I had anything in it. They ordered me to come down quietly and drove off with everything of mine, including my certificates. Thank God they were all statement of results not the originals. Till date, even if it’s in the afternoon and any cab wants to follow that road, I am always not at ease as it brings back bad memory. … Till date I still haven’t gotten over that as I avoid taking cabs when it’s dark or very early.”
“It’s actually not new and has been on for some years now. Guess it’s resurfacing cause of the period we are in. What is key however is vigilance, apart from checking the trunk of the vehicle, let someone accompany you to wherever you’re taking the taxi and try to take down the number plate of the vehicle and let the driver know that you have his number. Do not board unmarked taxis please. Avoid detours, insist he follows the route you’re accustomed with. Never let your guard down. Follow your instinct.”

“It has been going on for years now. Everyone is adviced, before you enter a cab, check the boot too. It had happened to a friend and a friend’s mum. In 2010, my schoolmate during final year exams had to write with bandaged thighs (they stabbed her repeatedly as they tried to push her out of the moving car and she fought back). In 2012, it happened to a corper, he fought back, and in that madness they hit a passer-by who died on the spot. Their car hit a poll but the thugs escaped as people chased after them. The corper was injured but ok. Many stories.”
Some shared pieces of advice and recommended precaution measures.

“The child lock is visible and accessible to all when the door is opened. Best thing is, have the door checked for the position of the lock before closing it on yourself.”
“Please remember that these guys are armed. Chances are that the victim could get stabbed through the seat which could cause a lot of damage if not death. I’ve done same even as a man, insisting on the driver opening his boot before boarding his taxi and my brother taking down his number. Added precautionary measure for night trips is to leave the light of the cab on during the journey.”
“The best way to avoid this is to go to the garage or motor parks when travelling in a commercial vehicle.”

“[As a reply to the above comment] That is not possible when you just want to move from Jabi to Wuse. Our town service taxis don’t have parks, and even when they do you can still meet such people. It happened to my friend last week. She left home early for her office … and they were advised not to bring their cars because of parking space, since other branches were coming for the workshop too. She lost all her belongings but God saved her. She was pushed from the moving vehicle by the second person who came out of the boot. Always ask the driver to open his boot. If he says no, don’t enter. Try not to take cabs too early or late. Buses are much safer.”