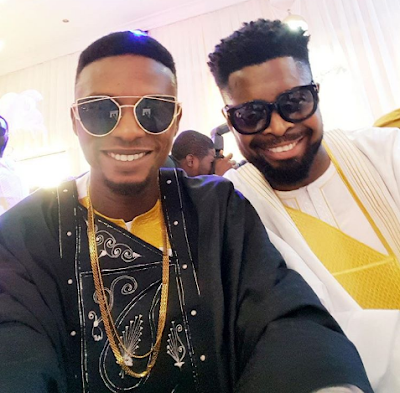 Comedian, I go Dye took to his Instagram page to pen down an emotional tribute to fellow comedian, Basketmouth. He recounted how he met him in UNIBEN and described him as witty, spontaneous and well put together. Read what he wrote below;

@basketmouth The comedy Icon. It all comes back to me like it was yesterday any time I think about this "blessing" called Basketmouth.
He is witty, spontaneous, well put together, always breaking boundaries and crazy.Even with his gargantuan achievements in the comedy world, he still works hard like an upcoming comedian. First time I saw him as I recall was in 1999 in UNIBEN, where I was billed to perform in one of those campus shows. He was tall and skinny, Bright Okpocha, whose eyes were as big as his dreams. His performance that night was on point as he thrilled the crowd more than you expected. I was thrilled that I was forced to invite him to Prest Motel. After his performance that night, we went to the pool side to gist for a while,after talking with him for just 5 minutes I then realised that his eyes were not just big for nothing after all, the young man must have seen the big picture from those early years.I remember him telling me that one day "I will host a comedy show where Eddie Murphy will be present as Eddie was the comedian that made him start comedy, one day I will perform at the Grammy award,I will create platform where young comedian will be discovered, and I will organise the biggest comedy show in africa and beyond", those were the words of the This comedy Icon. I believed him. Four months later, we met at the audition of Opa Williams nite of a 1000 laugh at Ojays nite club lagos to follow our dreams. He qualified with @Tejubabyfacetv and I was disqualified ,after the auditioning he came to me and introduced Teju to me, in his words, "meet my chairman this guy good die na dem we de look up to for benin" and at that moment the pain of me not qualifying brought tears to my eyes.Basketmouth wiped those tears off my eyes and since then my respect for him grew. Three years later I saw him on the front page of a newspaper, "Basketmouth ready to storm Europe", today he has toured almost every country in the world. The last time I saw him, was on BBC world news before we later meet at Buchi's wedding ceremony where he told me again that he wants to perform in London at a 10, 000 capacity hall on February 14."l don't know how I am going to fill