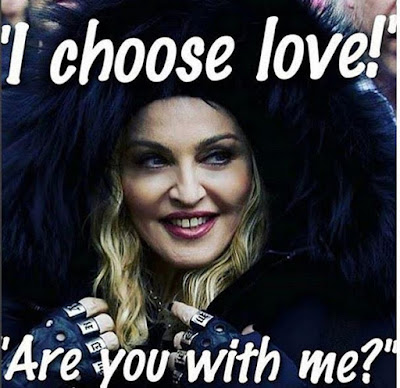 ‘I’m angry. Yes, I am outraged. Yes, I have thought an awful lot about blowing up the White House. But I know that this won’t change anything' were the words uttered by American pop star, Madonna while speaking at the Women’s March held in Washington, Saturday.
Her speech caught the attention of the Secret Service and many other around the world and with an alleged investigation into her claims under way, Madonna took to Instagram to clarify things.
She wrote;
‘Yesterday’s Rally. was an amazing and beautiful experience.

I came and performed Express Yourself and thats exactly what i did.
However I want to clarify some very important things. I am not a violent person, I do not promote violence and it’s important people hear and understand my speech in it’s entirety rather than one phrase taken wildly out of context.
My speech began with ” I want to start a revolution of love.” ♥️ I then go on to take this opportunity to encourage women and all marginalized people to not fall into despair but rather to come together and use it as a starting point for unity and to create positive change in the world.
I spoke in metaphor and I shared two ways of looking at things — one was to be hopeful, and one was to feel anger and outrage, which I have personally felt. However, I know that acting out of anger doesn’t solve anything. And the only way to change things for the better is to do it with love.
It was truly an honor to be part of an audience chanting “we choose love”. ♥️♥️♥️♥️ #revoltutionoflove♥️#revolutionoflove♥️’ she wrote.
Tweet