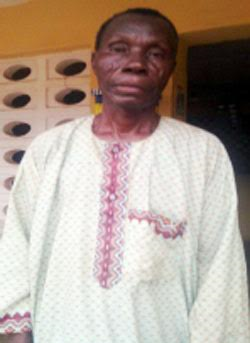 65 year old man Alosuposo Louis, pictured above, has been arrested by men of the Ogun state police command, for allegedly sexually assaulting two minors aged 10 and eight years. In a statement signed by the state Police Public Relations Officer, Abimbola Oyeyemi, the suspect who is a radio repairer, was arrested after one of the mother of the victims complained at the Aiyetoro police division in the state.


"Upon complaint, the DPO of Ayetoro Division, CSP Makinde Kayode, led a team of policemen to effect the arrest of the suspect. Further investigation later revealed that the suspect had done same to another minor, aged eight. The two victims were lured into his apartment, where he carried out the act. He has confessed to commiting the crime, and the two victims have been taken to General Hospital, Ayetoro”the statement read.

Oyeyemi stated that the suspect will soon be charged to court.
Tweet