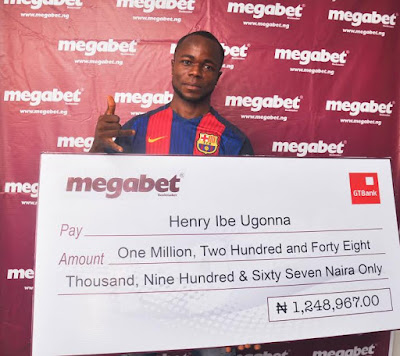 This is such a remarkable story. Enugu based Henry Ibe Ugonna (https://www.facebook.com/ibe.h.ugonna) won 1.25m from Megabet using just 299 Naira. Some of the games in his ticket included Barcelona to qualify after losing 4-0 to PSG, Leicester City to Qualify, and 12 other selections, and they all came true. What a remarkable feat by a remarkable young man.

Henry’s story is no less remarkable, he said “I have been playing betting for sometime, and I have won some money but some of the money I won with other companies was never paid. So in December my friend introduced me to Megabet and I decided to give them a try because I like their android app. I am really happy I won.”
When asked why he had to guts to predict that Barcelona will overcome a 4-0 first leg deficit to PSG, he said “ I am a Barcelona fan, so I really believed in them. Everybody told me that Barcelona was out, but I so much believe in them because I am their biggest fan. A lot of people in Enugu do come to me to help them predict games, and I try sometime but I do tell them that it is usually based on luck.”
When asked what he will do with his money, Henry said he will have to leave it in the bank for a while until the euphoria dies down, then he will decide after thinking clearly.
Megabet offers the fastest payout of any bookmaker in Nigeria, you get your winnings in just 60 seconds. They are the only bookmaker in Nigeria with Android and iOS apps. And they are the only bookmaker in Nigeria that has live video streaming where you can see what you are betting on.
You can visit the Megabet at www.megabet.ng or their mobile site at https://mobile.megabet.ng
Download the Android app - http://apps.betcoapps.com/android/sportsbook/sportsbook-megabet.apk
Download the iOS App -  http://appstore.com/megabetnigeriasportsbetting
Tweet